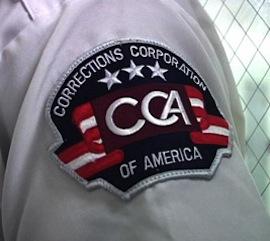 In Arizona an unsettling trend appears to be underway: the use of private prison employees in law enforcement operations.

The state has graced national headlines in recent years as the result of its cozy relationship with the for-profit prison industry. Such controversies have included the role of private prison corporations in SB 1070 and similar anti-immigrant legislation disseminated in other states; a 2010 private prison escape that resulted in two murders and a nationwide manhunt; and a failed bid to privatize nearly the entire Arizona prison system.

At 9 a.m. on the morning of October 31, 2012, students at Vista Grande High School in Casa Grande were settling in to their daily routine when something unusual occurred.

Vista Grande High School Principal Tim Hamilton ordered the school — with a student population of 1,776 — on “lock down,” kicking off the first “drug sweep” in the school’s four-year history. According to Hamilton, “lock down” is a state in which, “everybody is locked in the room they are in, and nobody leaves — nobody leaves the school, nobody comes into the school.”

“Everybody is locked in, and then they bring the dogs in, and they are teamed with an administrator and go in and out of classrooms. They go to a classroom and they have the kids come out and line up against a wall. The dog goes in and they close the door behind, and then the dog does its thing, and if it gets a hit, it sits on a bag and won’t move.”

While such “drug sweeps” have become a routine matter in many of the nation’s schools, along with the use of metal detectors and zero-tolerance policies, one feature of this raid was unusual. According to Casa Grande Police Department (CGPD) Public Information Officer Thomas Anderson, four “law enforcement agencies” took part in the operation: CGPD (which served as the lead agency and operation coordinator), the Arizona Department of Public Safety, the Gila River Indian Community Police Department, and Corrections Corporation of America (CCA).

It is the involvement of CCA — the nation’s largest private, for-profit prison corporation — that causes this high school “drug sweep” to stand out as unusual; CCA is not, despite CGPD’s evident opinion to the contrary, a law enforcement agency.

“To invite for-profit prison guards to conduct law enforcement actions in a high school is perhaps the most direct expression of the ‘schools-to-prison pipeline’ I’ve ever seen,” said Caroline Isaacs, program director of the Tucson office of the American Friends Service Committee (AFSC), a Quaker social justice organization that advocates for criminal justice reform.

“All the research shows that CCA doesn’t properly train its staff to do the jobs they actually have. They most certainly do not have anywhere near the training and experience–to say nothing of the legal authority–to conduct a drug raid on a high school,” Isaacs added. “It is chilling to think that any school official would be willing to put vulnerable students at risk this way.”

CCA, the nation’s largest for-profit prison/immigrant detention center operator, with more than 92,000 prison and immigrant detention “beds” in 20 states and the District of Columbia, reported $1.7 billion in gross revenue last year. This revenue is derived almost exclusively from tax payer-funded government (county, state, federal) contracts through which the corporation is paid per-diem, per-prisoner rates for the warehousing of prisoners and immigrant detainees.

And, CCA has a substantial presence in Casa Grande and throughout Arizona’s Pinal County (Casa Grande is the largest town in Pinal County). The corporation owns and operates a total of six correctional/detention facilities in the county, distributed through the towns of Florence and Eloy.

In 2009, the Central Arizona Regional Economic Development Foundation listed CCA as the largest non-governmental employer in Pinal County. To boot, CCA is a “Board Level” member of the Arizona Chamber of Commerce and Industry, a powerful trade/lobby organization, and is active in the Eloy, Florence, and Casa Grande chambers of commerce. (For more on CCA’s political influence in Arizona, see “Brownskins and Greenbacks,” DBA Press, June 2010.)

This CCA presence, coupled with the location of two correctional facilities operated by GEO Group (the nation’s second largest for-profit prison/immigrant detention center contractor) in the county, as well as two ADC-run prison complexes, makes Pinal County — which once cited mining and agriculture as its economic bedrock — a de facto prison industry community.

“CCA is like a skip and a hop away from us– as far as the one in Florence,” said Anderson. “We work pretty closely with all surrounding agencies, whatever kind of law enforcement they are– be they police, or immigration and naturalization, or the prison systems. So, yeah, this seems pretty regular to me.”

For his part, Hamilton seems equally unable to differentiate between law enforcement officers and employees of a for-profit prison corporation.  ”To be honest with you, I couldn’t tell if they were Casa Grande Police, Pinal County police, Gila River, the sheriff’s department– they all look the same,” said Hamilton.

But they are not the same.

Aside from the fact that CCA is a private corporation that derives its profits from the incarceration of human beings– such as minimum and medium security drug offenders — Arizona Administrative Code provides that, in order for any individual to engage in the duties of a “peace officer,” that individual must obtain certification from the Arizona Peace Officer Standards and Training (POST) Board. Arizona Revised Statutes defines “peace officer” to include such law enforcement personnel as: municipal police officers, constables, marshals, Department of Public Safety personnel, and community college/university police.

The POST Board is comprised of the Arizona Attorney General, the director of the Arizona Department of Corrections, the director of the Arizona Department of Public Safety, municipal police department chiefs, county sheriffs, state university personnel, and other public safety/law enforcement personnel. POST’s essential purpose, as defined by Arizona law is to “prescribe reasonable minimum qualifications for officers to be appointed to enforce the laws of this state and the political subdivisions of this state and certify officers in compliance with these qualifications.”

And, Arizona Administrative Code is very clear on this point: “a person who is not certified by the Board or whose certified status is inactive shall not function as a peace officer or be assigned the duties of a peace officer by an agency . . . ”

It is important to note that Arizona Administrative Code explicitly states that non-regular “peace officers” — secondary parties engaging in certain limited aspects of law enforcement under the command/supervision of regular peace officers — must also be POST certified.

This definition seems to fit the description — with the exception that CCA employees aiding CGPD “peace officers” are not POST certified — of what occurred at Vista Grande High School on the morning of October 31, 2012.

According to Officer Anderson and Principal Hamilton, the raid was organized and conducted at Hamilton’s request.

“We need to keep drugs off our campus,” said Hamilton when asked why he requested the raid. “We wanted to make sure our campus . . . we wanted to send a message to kids that we don’t want that stuff on our campus.”

Hamilton stated that, outside from this desire to send a “message to kids,” he had no knowledge of any particular drug use problem on his school’s campus.

CGPD then issued a request for assistance to what it considered to be other local law enforcement agencies — including CCA.

According to Anderson, CCA provided two canine units (handlers and dogs) to aid in the high school “drug sweep.” These CCA canine units worked under the command of the lead CGPD canine unit.

According to Anderson, there is no contract or formal agreement for such services extant between CGPD and CCA. Rather, said Anderson, CCA simply agreed to participate in the raid when approached by CGPD “K-9” officers. Anderson stated that he does not know whether CGPD ever contacted POST-certified correctional canine units at either of the two nearby ADC-operated prisons.

As to the general role canine units play in such school “drug sweeps,” Anderson stated that the dogs and their handlers are typically utilized to detect the presence of illicit materials in classrooms and school parking lots.

Regardless, according to both Anderson and Hamilton, this type of activity has been going on for years in Pinal County.

According to Anderson, a similar “drug sweep” — utilizing CCA canine units — was conducted at Casa Grande’s Union High School in 2011. Anderson has been unable to provide further details relating to this event.

According to Anderson, the Vista Grande High School raid is unlikely to be the last instance of CCA partnership with local law enforcement, as he assumed CGPD would use the corporation’s canine teams again, if needed.

CCA did not respond to multiple requests for comment regarding their involvement in law enforcement operations at public schools in Pinal County.

Conflict of Interest: From the Cradle to the Cell

According to Anderson, the students were referred to the juvenile division of Pinal County Superior Court. All students were then released to their parents/legal guardians.   According to Hamilton, the school will commence expulsion hearings against all students arrested.

It is worth noting that, while (as of November 12, 2012) charges have yet to be filed against students arrested in the October 31 Vista Grande drug raid, it is possible, under Arizona law, for the 17-year-old female allegedly found to be in possession of 10 ounces of “individually packaged” marijuana to be sentenced as an adult if charged with possession with intent to distribute — a felony which would could carry a prison sentence.

In addition, it is important to note that, under Arizona law, individuals arrested for illicit activity/possession of illicit substances on or near school grounds may face “drug-free school zone” sentencing enhancements. Those convicted of drug (including marijuana) offenses in Arizona courts, and sentenced through the stringent criteria of “drug-free school zone” sentencing enhancements, lose the possibility of sentence suspension, parole, or probation (which would rule out the possibility of a deferral or diversion). This sentencing enhancement also adds a mandatory year to any prison sentence handed down by the court.

While the recently-awarded 1,000 CCA Arizona prison beds have yet to come into operation, it is exactly this kind of low risk, minimum to medium security prisoner that corporations such as CCA derive much of their profit from.

« Grover Norquist’s GOP Tax Pledge: What It Is and How It Started
Israel Plans to Move Forward With E1 Settlements Despite International Outcry »