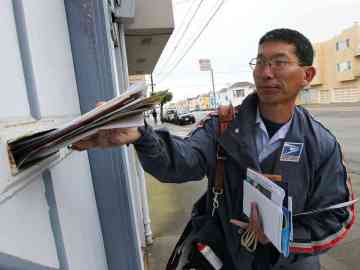 Faced with billions of dollars in losses, the Postal Service announced on Wednesday that it would seek to stop Saturday delivery of letters, a sweeping change in mail delivery that immediately drew criticism from postal unions, some businesses and lawmakers.

The post office said a five-day mail delivery schedule would begin in August and shave about $2 billion a year from its losses, which were $15.9 billion last year. The Postal Service would continue to deliver packages six days a week, and post offices would still be open on Saturdays. Reducing Saturday delivery is in line with mail services in several other industrialized countries like Australia, Canada and Sweden, which deliver five days a week.

The move raised immediate legal questions on Capitol Hill, where some lawmakers claimed that the Postal Service could not change its delivery schedules without Congressional approval. The post office has made earlier attempts to change the law, only to meet with objections or delays in Congress. Now, seizing a moment when the post office believes the law no longer applies, it moved on its own to shut down Saturday letter delivery.

Whether it will succeed is difficult to predict. Many lawmakers view the Postal Service as the quintessential government service that touches constituents almost every day, and rigidly oppose any changes. Also, postal worker unions hold sway over some lawmakers who are influential in writing legislation that governs the agency.

Whether the post office is ultimately blocked by an act of Congress or it tries to move ahead with ending letter delivery on Saturdays, the announcement on Wednesday moves postal overhaul legislation — which had stalled for many months — up the Congressional agenda.

“Our financial condition is urgent,” said Patrick R. Donahoe, the postmaster general, at a news conference announcing the change. “This is too big of a cost savings for us to ignore.”

Mr. Donahoe said the move to end Saturday delivery was part of a long-term plan to return the agency to profitability. Since 2010, the agency has continued to close post offices, reduce hours at many small, rural offices and cut staff. It also announced plans to sharply reduce the number of its regional processing plants. Last month, the agency raised the price of a first-class stamp to 46 cents, the latest in a series of generally annual postage increases.

But post office officials say the cuts, rate increases and staff reductions are not enough to make up for the two reasons it is losing money. One is a requirement that it pay nearly $5.5 billion a year for health benefits to future retirees, a mandate imposed on no other government agency. Second, since 2007, first-class mail volume has declined by 37 percent as use of e-mail and online payment services has soared.

The Postal Service also said the rise in online retail purchases and other e-commerce was contributing to its increase in that area and was why it would continue to deliver packages on Saturdays.

Since 1981, a Congressional mandate has required the Postal Service to deliver mail six days a week. But on Wednesday the agency argued that since the current stopgap budget measure for the entire government, known as a continuing resolution, did not contain language explicitly mandating six-day delivery, the agency could make the changes without Congressional approval.

But some members of Congress immediately questioned the Postal Service’s claim.

“The passage of the continuing resolution did not suspend that language, as they claim, but in fact extended it,” said Representative José E. Serrano, Democrat of New York and ranking member on the appropriations subcommittee on financial services and general government, which has jurisdiction over the post office. “Rather than use very dubious legal arguments to end Saturday delivery, the U.S.P.S. should work hand in hand with Congress to come up with a successful restructuring and reform package that allows them to become more efficient while maintaining vital services like Saturday delivery.”

Senator Thomas R. Carper, Democrat of Delaware, who led a bipartisan effort to pass a postal overhaul bill last year, called the post office decision disappointing. But he added, “Despite my disappointment, it’s hard to condemn the postmaster general for moving aggressively to do what he believes he can and must do to keep the lights on at the Postal Service, which may be only months away from insolvency.”

One thought on “U.S. Post Office To End Saturday Letter Delivery This Summer”