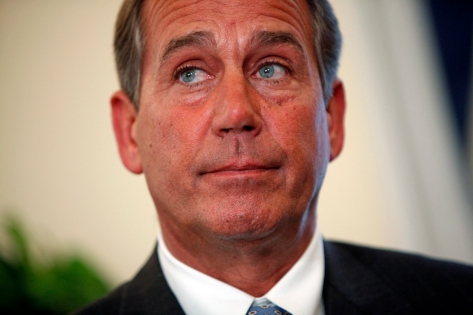 Things were so bad for Speaker John Boehner Thursday night, support for his Plan B tax bill so diminished, the limits of his power with his own party laid bare, that he stood in front of the House Republican Conference and recited the Serenity Prayer.

The Ohio Republican accepted that he couldn’t change the minds of his House Republican Conference. He tried to convince them that, facing tough negotiations with President Barack Obama over the fiscal cliff, he needed them on his side — and he fell short. With that, Boehner — a man who has clawed back from the political ledge to arrive at the top rung of power — saw perhaps the lowest moment in his speakership.

It was supposed to be a moment of strength, a way to drag Obama and the Democrats toward them in the high-stakes fiscal cliff negotiations that have Washington teetering on the brink. Instead, it showed the world that either Boehner couldn’t bring 217 of his own members to his side, or they were unwilling to be led by him in this fight.

Rep. Mike Kelly, a burly freshman from Pennsylvania, stood in front of a closed meeting in the basement of the Capitol and said his fellow Republicans were selfish. Boehner, he said, has done a good job.

It was too late. The meeting had adjourned. No heartfelt rhetoric from Boehner. He and Majority Leader Eric Cantor (R-Va.) simply read statements later delivered to the press, and went their respective ways. It’s unclear when the House will return. GOP aides said it could even be 2013, after big tax increases and spending cuts kick in, although they have been warned to be on 48-hour notice to return to Washington if necessary.

Thursday’s drama irreversibly changes the dynamics in the negotiations to solve the legislative morass known as the fiscal cliff.

For starters, the House Republican Conference has significantly tamped down Boehner’s (R-Ohio) leverage. Forget rallying support to a plan he crafted with Obama — he couldn’t get people on board with his own plan.

Boehner’s statement — released after the closed meeting in the House basement — seemed to hand off the the nation’s fiscal crisis to Democrats.

“Now it is up to the president to work with Sen. Reid on legislation to avert the fiscal cliff,” Boehner said Thursday night.

Boehner’s Republican Conference has relegated their negotiator to the sidelines. Now, Republicans will see why Boehner was willing to offer Obama so much: The final deal Republicans will now have to swallow will be driven by Senate Majority Leader Harry Reid (D-Nev.) and Obama.
“He’s tried his best,” said Rep. Steve LaTourette (R-Ohio), a longtime Boehner confidant who is leaving Congress at the end of the year. “But sometimes your best isn’t good enough in the face of some people that just don’t want to find common ground.”

Rep. Buck McKeon, a California Republican who has served with Boehner for two decades, said what happened to the speaker is a “real shame.”

“He has worked his heart out to try to get the best deal he can, and to have this happen is very sad for the country,” McKeon said.

In the end, his strategy backfired.

Boehner begged for a one-on-one negotiation with Obama — a power play to show he, not his unruly conference, was running the show. He emerged from Mitt Romney’s loss as a strengthened leader: He’s the most powerful Republican in the country.

He even moved to strip trouble-making lawmakers of plum committee assignments in a bid to flex his internal muscle. Without consulting his membership, Boehner offered Obama $800 billion in revenue.

“This is where I’m going,” Boehner personally told his fellow leaders when he made Obama the offer, a fresh blast of confidence.

That newfound political capital was quickly sanded-down by Boehner’s own crew.

What happened to the 63-year-old in just the last week is striking. On Saturday night, word leaked out that he had given into the White House’s demand that he allow tax rates on the rich to snap to 39.6 percent. Immediately, conservatives were grumbling but still gave Boehner room to maneuver.

On Monday night, Boehner called Obama to inform him he would devise a plan and pass it out of the House — Plan B, he called it — because negotiations with the White House weren’t moving quickly enough.

His leadership team spent the past few days gathering support for the legislation — as of late Wednesday, there were clear signs that Boehner’s bill did not have sufficient support. On Wednesday night and all day Thursday, Boehner worked the House floor, personally making the case for the bill to wavering members. By late Thursday, he was sitting on the floor with Reps. Patrick Tiberi (Ohio), Tom Latham (Iowa) and Mike Simpson (Idaho) — close allies and friends, who support the speaker unfailingly.

Top Republicans remained hopeful, until late Thursday when GOP lawmakers voiced a public protest. Twenty-one Republicans voted against a spending bill to send a signal to leadership that the tax-rate bill didn’t meet their muster. It was the rank and file screaming that Plan B would not pass.