Grover Norquist’s GOP Tax Pledge: What It Is and How It Started 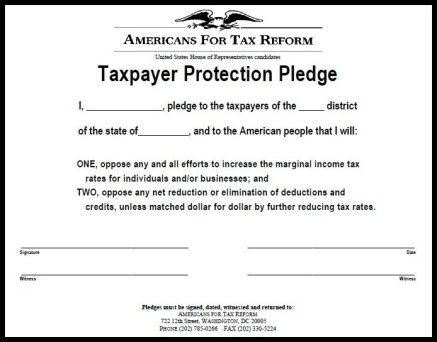 As Congress wrangles over the fiscal cliff, one tiny document will loom large over the negotiations.

Known in Republican circles simply as “The Pledge,” the Americans for Tax Reform (ATR) Taxpayer Protection Pledge has steered GOP tax policy for decades, applying pressure to any candidate, lawmaker, or president who would raise taxes. If tax rates aren’t at stake, the pledge is equally unforgiving to those who would limit deductions, even as a tradeoff, as Republicans are now being asked to do by Democrats and President Obama.

One, oppose any and all efforts to increase the marginal income tax rates for individuals and/or businesses; and

Two, to oppose any net reduction or elimination of deductions and credits, unless matched dollar for dollar by further reducing tax rates

Much has been made lately of the pledge’s allegedly diminishing influence, after House Speaker John Boehner indicated revenue increases would be on the table in fiscal-cliff talks. But Republicans who hint at pledge violations have a way of revising their statements with vague language about filling government coffers without going against the vow.

The pledge began in 1986 under the aegis of president Ronald Reagan.

Grover Norquist, a Republican and former staffer at the U.S. Chamber of Commerce, had launched Americans for Tax Reform in 1985 to advocate for tax reforms Reagan was pushing in his second term. The group was financed largely by corporate sponsors such as Kraft, the Associated Press reported at the time.

In the midterm campaign year of 1986, Norquist rolled out the Taxpayer Protection Pledge as a way to pressure candidates to support Reagan’s tax agenda, and as a cudgel for Republicans to wield against Democrats on the campaign trail.

“We intend to make tax reform permanent,” Norquist explained that year. Reagan had already passed tax reforms in 1981–drawing the same Democratic criticism of GOP tax policies as today, namely that they favor the wealthy–and the second-term president eyed the 1986 bill as part two of his tax agenda.

Reagan and congressional Republicans signed onto it. ATR pushed the pledge through the Republican Information Network, a newfangled proto-Web tool for GOP campaigns, along with sample press releases offered up as blueprints for GOP candidates to attack their Democratic foes.

Since then, Norquist’s pledge has helped enforce near-uniformity in Republican ranks, enshrining as dogma a policy of never raising tax rates. George H.W. Bush, who did not sign the pledge, lost re-election after raising taxes, breaking his own “read my lips: no new taxes” vow, as Norquist is usually quick to point out. Raising taxes “ruined” Bush’s presidency and “cut it in half,” Norquist told ABC in a phone interview in June.

The pledge has worked for 26 years because it’s simple.

‘If you want a politician to make a commitment and you want it to matter, it can’t be four paragraphs long, I can’t have moving parts — you can’t remember what’s in it,” Norquist told The Atlantic in 2011.

And as Norquist puts it, signers are beholden to voters, not to him or his group.

The pledge may be facing its biggest test yet. Norquist has his enemies and frenemies on both sides of the aisle, including Republican Sens. Lindsey Graham and Tom Coburn, both of whom have stood cleanly against any obligation to the pledge. About a dozen incoming House Republicans haven’t signed it, and a few more have distanced themselves from it, The Hill’s Russell Berman reported after the 2012 election.

Throughout 2012, with fiscal-cliff negotiations approaching, Norquist has been adamant that Republicans will not vote to raise taxes or limit deductions without finding new tax cuts elsewhere. Even as some Republicans have backed away from his anti-tax line, the pledge has history on its side.