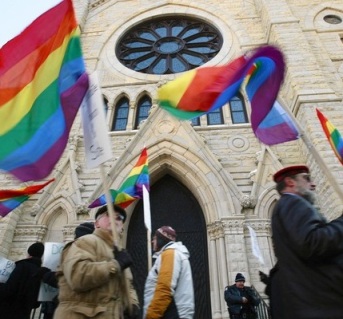 Continuing its efforts to fight same-sex marriage in four ballot measures around the United States, the Catholic Church is now the top donor to the cause among religious institutions, according to a new report from the Human Rights Campaign.

This fall in Washington, Maryland and Maine, voters will decide whether same-sex marriage should be legal, and in Minnesota, voters will weigh in on a ballot measure amending the state’s constitution to define marriage as a union between a man and a woman.

According to recent news reports, opponents of same-sex marriage are expected to be widely outspent by gay rights advocates this election season, and recent polling has shown voters in Maryland, Maine and Washington are warming to the idea of legalizing marriage for same-sex couples. But opponents have history on their side: 32 states have previously held votes on same-sex marriage and, each time, voters have opposed it.

According to the report from HRC, a gay rights group has spent $4.4 million across the four ballot states, while the Catholic Church has spent at least $1.1 million on efforts to oppose the measures. A significant portion of this money comes from the Knights of Columbus, a fraternal organization within the church, while other funds come from dioceses nationwide. The church’s donations amount to roughly a quarter of the effort across the four states to fight same-sex marriage, and in Minnesota, the Catholic Church has funded more than half of the efforts to support the constitutional ban, according to HRC.

“The Catholic Church hierarchy has positioned itself as the leading religious organization funding discrimination against LGBT people,” said HRC President Chad Griffin, in a press release that highlighted recent polling from the Public Religion Research Institute, which found that a majority of Catholics support same-sex marriage.

“Perhaps most disturbing is the number of local parishes redirecting the hard-earned dollars of its members in the name of discrimination,” Griffin said. “The Church hierarchy owes the laity an explanation as to why they are spending this much money on discrimination, and at what cost to other crucial Church programs.”

Jessica Zittlow, a spokeswoman for the Minnesota Catholic Conference, told the Huffington Post that funds devoted to advocating for Minnesota’s marriage amendment have not taken away funding from other programs in the state.

With just a few exceptions, Minnesota Catholics have not been directly asked by the church to donate to these efforts, she said.

“Our marriage amendment activities, like our other activities, are aimed at fostering the common good,” Jason Adkins, the executive director of the Minnesota Catholic Conference, said in a statement.