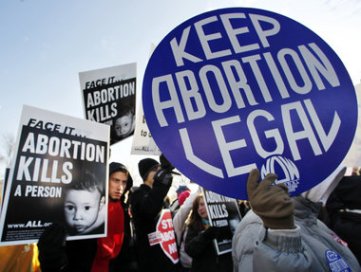 * Mississippi could be first state without abortion facility

American women face increasing legal obstacles to obtaining abortions as more states pass laws restricting access, some so stringent they approach a ban on the procedure, according to a report issued on Wednesday by the Center for Reproductive Rights.

Among the measures are some the group claims seek to ban abortion by imposing rules so burdensome upon women and providers it is nearly impossible to comply.

Mississippi and Tennessee passed such measures this year. The Center for Reproductive Rights has challenged the constitutionality of Mississippi’s new law, which requires abortion providers to be certified in obstetrics and gynecology and have hospital admitting privileges.

A federal judge ruled last week that Mississippi could enforce the law, but also allowed the state’s sole abortion clinic to continue legally operating while it tries to comply. Should the law ultimately result in the clinic’s closure, Mississippi would be the first U.S. state without a single abortion facility.

“I think the constitutional protection for women’s rights to choose is robust, but that isn’t stopping state legislatures from introducing terrible legislation and, increasingly, passing it,” said Jordan Goldberg, the center’s state advocacy counsel who authored the report entitled “2012 At the Midpoint: The Assault Continues.”

“I don’t think it’s a question of the right not existing anymore,” Goldberg said. “It’s that we will have to resort to the courts to protect it.”

The report referred to 2012 as the “powerful aftershock” that followed what it called last year’s “seismic” attack on reproductive rights. More than 60 laws passed in two dozen states in 2011 seeking to restrict access to women’s health care, according to the report.