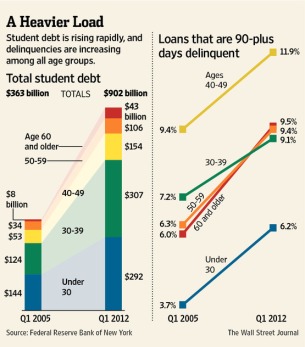 Student debt is rising sharply among all age groups, but middle-aged Americans appear to be struggling the most with payments, according to new data released Tuesday by the Federal Reserve Bank of New York.

The delinquency rate—or the percentage of debt on which no payment has been made for 90 days—was 11.9% for debt held by borrowers aged 40 to 49 as of March. That compares with a rate of 8.7% for borrowers of all ages.

The New York Fed, which based its data on a sampling of consumer credit reports, said delinquency rates for all groups are much higher if one excludes loans in deferment for reasons such as a borrower still being in school.

High delinquency rates on student debt are causing concerns among economists because delinquencies damage a person’s credit, making it harder for consumers to borrow in the future, while causing the total debt to grow as interest and penalties accrue.

Two-thirds of the nation’s $900 billion in student debt is held by Americans under 40, the Fed estimates. But borrowers over 40 are having a particularly tough time with student debt for several reasons, consumer and higher-education experts say.

Many debtors over 40 are still paying balances from college years ago, while their home values and savings have declined sharply in recent years. Some have stopped payments after losing jobs. Many parents—no longer able to tap home equity to pay for their children’s education—are taking out new student loans to do so. An Education Department program that provides loans to parents to fund their kids’ education is among the fastest-growing of the government’s education loan programs.

Student debt has been rising as enrollments and tuition climb. The Fed data show the number of Americans with student debt rose to 37 million this year from 23 million in 2005.

Since 2005, the number of Americans in their 50s with student loans has doubled to 4.6 million, and borrowers in their 60s and older more than tripled to 2.2 million.