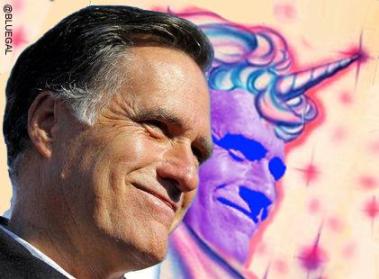 The time has come for Mitt Romney to prove it once and for all: Is he or is he not a unicorn?

Let me stipulate that I have no proof that Romney is a unicorn, and indeed I want to believe that he is not. But I have not seen proof of this because he has not released the original copy of his long-form birth certificate.

There are many others who feel as I do — 18,000 people to be precise. I first began to consider the possibility that Romney might be a unicorn when I heard that LeftAction, an online petition operation created by Democratic PR guy John Hlinko, was campaigning to get the Arizona secretary of state to certify that the presumptive Republican nominee is not a mythical beast before allowing his name to be on the presidential ballot.

“There has never been a conclusive DNA test proving that Mitt Romney is not a unicorn,” the group wrote last week. “And if Mitt Romney is or may be a unicorn, he is not Constitutionally qualified to be president.”

The mittromneyisaunicorn­.com campaign came about because Arizona Secretary of State Ken Bennett, citing allegations that the birth certificate President Obama released is a fraud, threatened to take the incumbent off the ballot.

Obviously, the likelihood that Romney is a fanciful equine is no more plausible than the claim that Obama was born in Africa. So why is the unicorn fair game? Because Romney has made it so.

Romney is scheduled to hold a fundraiser Tuesday night in Las Vegas with Donald Trump, the nation’s most prominent “birther.” The real-estate tycoon, in interviews last week with the Daily Beast and Tuesday with the Las Vegas Review Journal, revived his charge that Obama was born in Kenya.

Romney on Monday declined to repudiate Trump, telling reporters aboard his plane: “I don’t agree with all the people who support me. . . . But I need to get 50.1 percent or more. And I’m appreciative to have the help of a lot of good people.”

It’s not the first time Romney, who once distanced himself from the birthers, has failed to stand up to sinister elements on the right. But this is a particularly unsavory crowd.

Some members have already turned against Romney. In a lawsuit filed in March, a group of birthers sued to require California to verify the eligibility of all presidential candidates. Obama is “arguably ineligible,” the plaintiffs wrote, and “a similar situation may exist concerning the Republican Party candidacy of Mitt Romney.” A lawyer for the birthers said the claim is related to George Romney’s time in Mexico as a child.

There actually is a minor controversy surrounding Romney’s birth certificate. Boston Globe columnist Joan Vennochi, pursuing a theory that the candidate’s middle name is “Milton” rather than “Mitt,” asked Romney’s campaign five years ago for a copy of the birth certificate. The campaign declined.

4 thoughts on “Is Mitt Romney A Unicorn? Birthers, Meet “Corners””