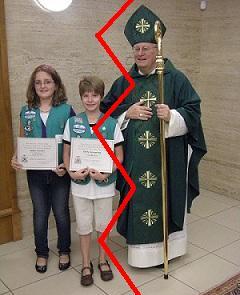 via Nicole Brodeur, The Seattle Times

The Little Rascals had the “He-Man Woman Haters Club.” We’ve got The Catholic Church.

Just a few weeks after the Vatican started looking into the activities of the umbrella group representing some 57,000 American nuns, the U.S. Conference of Catholic Bishops (USCCB) showed it had smaller fish to fry: The Girl Scouts of America (GSA).

The nation’s cutest cookie pushers are the subject of an “official inquiry” by the bishops’ Committee on Laity, Marriage, Family Life and Youth, according to National Public Radio.

The bishops are suspicious of some of the scouts’ program materials, and relationships with groups that conflict with church teaching. (The Girl Scouts are a secular group, but many troops are church-based.)

The USCCB doesn’t like that the Girl Scouts have connected with groups like Doctors Without Borders, the Sierra Club and Oxfam International, because they support family planning and emergency contraception, the report said.

It doesn’t like that the Girl Scouts belong to the 145-nation World Association of Girl Guides and Girl Scouts, which supports girls and women having “an environment where they can freely and openly discuss issues of sex and sexuality.”

It doesn’t like that one troop in Colorado welcomed a transgender Scout.

Nor does it like that when Girl Scouts CEO Anna Marie Chavez was featured in Marie Claire magazine, Scouts were directed to the magazine’s home page, which includes the promotion of a sex-advice column.

That’s rich: U.S. bishops getting so uptight about sex, when in 2004, a survey by the John Jay School of Criminal Justice found that 4,392 American priests were alleged to have sexually abused young people in their pastoral care.

Where was the outrage and inquiry then? Why weren’t they as suspicious then as they are now?

If the bishops order Catholic girls to leave the Scouts, it could fold the organization’s tent for good. Membership already has been dropping off, and the Girl Scouts estimate that one-fourth of their 2.3 million members are Catholic.

What a nice way to mark the Girl Scouts’ 100th anniversary: Make them part of the continuing War on Women.