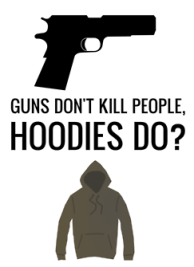 The debate over the shooting death of Trayvon Martin seems to be devolving into an argument about the right to wear hoodies, but it really does not appear to be a promising development.

Congress, which never draws any serious conclusions from terrible tragedies involving gunplay, did have time on Wednesday to fight about whether Representative Bobby Rush of Chicago violated the House dress code when he took off his suit jacket, revealing a gray sweater he was wearing underneath, and pulled the hood up over his head.

You may remember that Geraldo Rivera took measure of the Martin case and determined that the moral was: young men, throw out your hoodies. Even Rivera’s son said he was embarrassed. But, hey, we’re talking about it. Mission accomplished.

“Just because someone wears a hoodie does not make them a hoodlum,” Congressman Rush said, before he was hustled off for violating the rule against wearing hats on the House floor.

This is pretty much par for the course. Whenever there is a terrible shooting incident somewhere in America, our politicians talk about everything except whether the tragedy could have been avoided if the gunman had not been allowed to carry a firearm.

You would think that this would be a great time to address the question of handgun proliferation, but it has hardly come up in Washington at all. This is because most politicians are terrified of the National Rifle Association. Also, the small band of gun control advocates are busy with slightly less sweeping issues, such as their ongoing but still utterly futile effort to make it illegal to sell a weapon to anyone on the terror watch list.

The only serious debate Congress is likely to have this year on the subject of guns involves whether to allow people with concealed weapons permits to carry their handguns into other states.

Say you were from — oh, maybe Florida, where George Zimmerman was carrying a legal, loaded pistol while he was driving around his gated community, looking for suspicious characters. In Florida, even non-Floridians can get a concealed carry permit. You can get the application online. From the Department of Agriculture. (“Fresh from Florida.”)

Under a bill sponsored by Senator Mark Begich, Democrat of Alaska, you could take your Florida permit and your Florida loaded handgun and travel anyplace in the country, including the states where the police investigate every permit application, and say yes to relatively few. “If this law existed today, George Zimmerman could carry a loaded hidden handgun in Times Square. Today,” said Dan Gross, the president of the Brady Campaign to Prevent Gun Violence.

And that would be the moderate version.

Senators John Thune of South Dakota and David Vitter of Louisiana have a competing bill that would relieve residents of states like Vermont and Arizona — which don’t require concealed weapons permits at all — from the cumbersome process of actually putting in some paperwork before they tote their handguns to, say, California or New Jersey. Under this one, Jared Loughner, who shot Representative Gabrielle Giffords, a judge, a small child and four other innocent Arizonans, could have brought his loaded handgun to Times Square.

There is a serious trend toward states letting their residents carry concealed weapons with no more background check than you need to carry a concealed nutcracker. All of this is based on the gun rights lobby’s argument that the more armed law-abiding people we have on our streets, the safer everybody will be. Under this line of thinking, George Zimmerman’s gated community was safer because Zimmerman was driving around with his legal gun. You can bet that future Trayvon Martins who go to the store to buy Skittles after dark will seriously consider increasing their own safety by packing heat. The next confrontation along these lines may well involve a pair of legally armed individuals, legally responding to perceived, albeit nonexistent, threats by sending a bullet through somebody’s living room window and hitting a senior citizen watching the evening weather report.

The Violence Policy Center has a list of 11 police officers and 391 private citizens who have been killed over the last five years by people carrying concealed weapons for which they had a permit. That includes a man in Florida who killed four women, including his estranged wife, in a restaurant in 2010 and another Floridian who opened fire at Thanksgiving, killing four relatives.

You would think all of this would cause states to stop and rethink. But no. And, personally, I’m worn down from arguing. Florida, follow your own star. Arizona, arm your kindergarteners. Just stop trying to impose your values on places where the thinking is dramatically different.