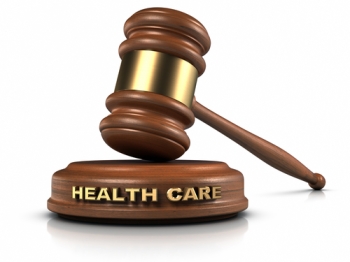 via Mark Sherman and Jesse J. Holland, The Huffington Post

Arguments at the high court focused on whether the mandate for virtually every American to have insurance “is a step beyond what our cases allow,” in the words of Justice Anthony Kennedy.

He and Chief Justice John Roberts emerged as the seemingly pivotal votes in the court’s decision, due in June in the midst of a presidential election campaign that has focused in part on the new law. Republican candidates are strongly opposed.

Justices Antonin Scalia and Samuel Alito appeared likely to join with Justice Clarence Thomas to vote to strike down the key provision of the overhaul. The four Democratic appointees seemed ready to vote to uphold it.

The congressional requirement to buy health care insurance is the linchpin of the law’s aim to get medical insurance to an additional 30 million people, at a reasonable cost to private insurers and state governments. Virtually every American will be affected by the court’s decision on the law’s constitutionality.

The biggest issue, to which the justices returned repeatedly during two hours of arguments in a packed courtroom, was whether the government can force people to buy insurance. And if so, could other mandates – to buy broccoli, burial insurance and cell phones, for example – be far behind?

“Purchase insurance in this case, something else in the next case,” Roberts said.

“Do you not have a heavy burden of justification to show authority under the Constitution” for the individual mandate? asked Kennedy, who is often the swing vote on cases that divide the justices along ideological lines.

Solicitor General Donald Verrilli Jr. sought to assure the court that the insurance mandate in the Patient Protection and Affordable Care Act that Obama signed into law two years ago is a key part of the law’s goal of reaching many of the more than 40 million people who don’t have health insurance through their employers, don’t qualify for government aid and cannot afford to buy coverage on their own.

Paul Clement, a predecessor of Verrilli’s who is representing Florida and 25 other states in challenging the law, called the mandate “an unprecedented effort by Congress.”

He said the requirement would force people, especially those who are young and healthy, to buy a product they don’t want.

Justice Ruth Bader Ginsburg said she found the debate over health care similar to an earlier age’s debate about the Social Security retirement system. How could Congress be able to compel younger workers to contribute to Social Security, but be limited in its ability to address health care? she wondered.

Does it to have to be “a government takeover”? she asked.

Clement acknowledged that a system of national health insurance might well be constitutional.

Earlier, Scalia repeatedly pointed out that the federal government’s powers are limited by the Constitution, with the rest left to the states and the people. “The argument there is that the people were left to decide whether to buy health insurance,” Scalia said.

Scalia and Roberts noted that the health care overhaul law would make people get insurance for things they may not need, like heart transplants or pregnancy services. “You can’t say that everybody is going to participate in substance abuse services,” Roberts said.

On the other hand, Ginsburg said, “The people who don’t participate in this market are making it more expensive for those who do.”

“You could say that about buying a car,” Scalia retorted, noting that if enough people don’t buy cars the cost could go up.

But, unlike cars, almost everyone eventually will be required to use the health care system, Verrilli said in defense of the law. Without health insurance, he said, “you’re going to the market without the ability to pay for what you’re going to get.”