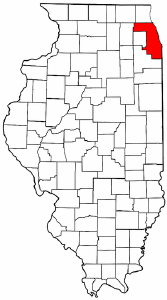 The bill [HJR0052] argues that the state of Illinois is “functional to the extent that its people agree on politics, society, and economics.” Because, according to the bill, the majority of Cook County residents “hold different and firmly seated views on these important questions” than residents of the state’s other 101 counties and have roughly equivalent populations. They both should each “enjoy the chance to govern themselves with their firmly seated values,” the bill’s sponsors believe.

Mitchell’s bill goes on to cite Maine’s secession in 1819 from the state of Massachusetts after over forty years of being a “physically separate but politically contiguous” part of the state.

The bill, finally, calls on the state’s General Assembly to authorize a referendum leaving the matter up to the state’s voters. Once approved, the fate of the bill would then theoretically be left up to the U.S. Congress and President Obama.

Mitchell explained to the Decatur Tribune that when he speaks with his constituents, “one of the biggest things I hear is ‘Chicago should be its own state.'”

“Downstate families are tired of Chicago dictating its views to the rest of us,” Mitchell continued. “You only have to look at the election results from last year’s governor’s race to see the problem. Cook County carried Pat Quinn, while almost every downstate county supported Bill Brady. Our voters’ voices were drowned out by Chicago.”

As of Tuesday, only state Rep. Adam Brown, R-Decatur, has signed on to the measure as a co-sponsor. He told the Decatur paper that “lame-duck Democrats” were responsible for the passage of the state’s income tax hike, civil union passage and the abolition of the death penalty.

“These liberal policies are an insult to the traditional values of downstate families,” Brown told the Decatur Tribune.

« Bank Lobbying On Track To Reach Record High This Year
If At First You Don’t Succeed At Making Zygotes People, Try Again »