If At First You Don’t Succeed At Making Zygotes People, Try Again 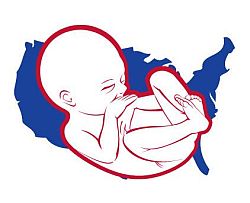 Undeterred by Mississippi’s failed attempt to grant fertilized eggs the same rights as adult humans, anti-abortion rights advocates in Colorado and Virginia signaled Monday that intend to bring the effort to their states.

In Virginia, Delegate Bob Marshall (R) filed legislation that would amend the state constitution to declare that the “life of each human being begins at conception” and would grant all rights of Virginia citizenship to those “unborn children.” Unlike Mississippi’s measure, this bill specifically excludes “lawful assisted conception”—apparently embyros created for assisted reproduction aren’t people. The proposal also states that there should be no action taken against a woman “for indirectly harming her unborn child by failing to properly care for herself or by failing to follow any particular program of prenatal care.” The legislative language doesn’t mention birth control, abortions to protect the life or health of the mother, or abortions in the case of rape or incest—all of which would likely be affected by this kind of law.

Colorado’s attempt comes in the form of a ballot initiative from Personhood Colorado—the same group that led two previous failed ballot measures in the state, in 2008 and 2010. This time, they’re making it clear that they are also going after birth control and assisted reproduction. The Denver Post reports:

The 2012 Personhood Amendment would add a new section to the state constitution to “affirm basic human dignity” and guarantee that the right to life “applies equally to all innocent persons” and “the intentional killing of any innocent person is prohibited.”

“Our language is very clear this time,” said Kristi Burton Brown, amendment co-author and Personhood Colorado founder. “No one can doubt our intentions or the effects this time.”

The 2012 language states that only birth control, in-vitro fertilization and assisted reproduction “that kill a person” shall be affected by this amendment.

The term “person,” the proposed amendment states, applies to “every human being regardless of the method of creation” and a human being is “a member of the species homo sapiens at any stage of development.”

Wisconsin, Georgia, and a number of other states are pursuing similar measures.