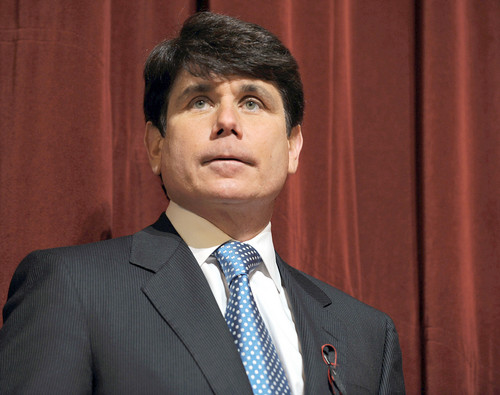 Federal prosecutors argue Rod Blagojevich could serve 30 years to life in prison, sources say — a sentencing range that will be bitterly disputed by the former governor’s defense lawyers.

Blagojevich attorney Sheldon Sorosky wouldn’t discuss the government’s numbers, which were submitted in private. But he said the defense will submit its own calculations.

“We are preparing a submission to Judge Zagel, which is far, far, far, under those draconian and harsh and cruel numbers,” Sorosky said. “We are making our own guideline calculation which is fair and based on facts and the evidence at trial.”

Blagojevich, 54, who is now scheduled to be sentenced Oct. 6, was convicted in June on 17 counts of corruption, including charges that he schemed to sell President Obama’s vacant U.S. Senate seat. Blagojevich was also convicted last year of one count of making false statements to the FBI.

But the range expected to be put forth by prosecutors is not set in stone. Judges rely heavily on recommendations put together by the U.S. Probation Department.

Defense lawyers will also submit their version of events. They’re expected to argue that Blagojevich shouldn’t get much prison time because he didn’t take money in the crimes for which he was convicted.

U.S. District Judge James Zagel will have wide discretion over the former governor’s prison term, as sentencing guidelines for federal judges are advisory.

In the prosecution’s calculations, Blagojevich faces more time because he took the witness stand and allegedly lied. As governor, he was also leader of an enterprise, they will argue.