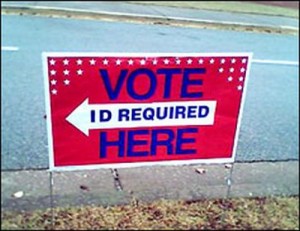 The Department of Justice is reviewing, and has the power to reject a controversial new law passed in South Carolina that requires a registered voter to present a government -issued photo ID before his or her vote is counted.

Gov. Nikki Haley signed the bill into law in May and she’s not alone. Four other states have passed similar voter ID laws in 2011, including Wisconsin, Texas, Tennessee and Kansas. But thanks to the DOJ, South Carolina’s law could still be rejected by federal officials.

And while other states have passed voter photo ID laws in the past, the laws passed in 2011 are by far the strictest with the exception of the law passed in 2005 by the state of Indiana.

Section 5 of the 1965 Voting Rights Act empowers the DOJ to review election laws passed in select southern sates as well as Alaska and some counties throughout the country.  Crafted in a time of great racial stife, the act was meant to codify the power of the 15th Amendment, which forbids racial discrimination at the polling booth.

South Carolina, which is subject to federal review, is the only state to have petitioned the Obama Justice Department for approval while other states such as Texas opted to clear their law through the D.C. District Court, which is also permitted.

Critics of a stricter photo ID law argue that the requirement will make it tougher for poor and minority voters to cast their ballot while proponents call it a common sense provision.

Voters without the means to produce correct documents or the disabled can verify their identity through an affidavit but many still see the ID requirements as too burdensome.

“A number of state legislatures have taken up these bills and I think that it’s a growing concern nationally that the effect is going to be the suppression of the vote,” said Victoria Middleton, executive director for the South Carolina ACLU.

Republicans, in 2010, swept state legislatures across the country and have used the ensuing authority to pass various controversial measures, including laws that restrict funding to Planned Parenthood at the state level.

As for why the Obama Justice Department might be interested in the South Carolina law, fewer eligible minority voters could hurt the president because they tend to vote Democratic.

“These kinds of voter ID laws could make a difference on the margins and President Obama is fighting for every last percentage he can get,” said David Wasserman, a political analyst for the Cook Political Report.

As many as 11 percent of the voting population, or about 21 million people, do not have access to a government issued ID, according to the Brennan Center for Justice at NYU School of Law.  Still, studies highlighted by the Heritage Foundation show that photo ID laws have no effect on minority voter turnout.

Wisconsin College students voting in their local college towns might also have trouble voting because the new voter ID law in Wisconsin require the ID to show an address that matches their voting precinct when many students will have an ID that comes from their hometown.

And the college city of Madison, Wis., generates the state’s largest number of Democratic votes, according to Wasserman.

Still, there are many who like the new voter ID laws and disapprove of the DOJ’s inquiry, arguing that the federal government has no business in “pre-clearing” state election laws.

“It’s a historical artifact of the civil rights era,” said Tom Fitton, president of Judicial Watch. “The idea that South Carolina needs to be treated today by the federal government is absurd.”

Some Democratic politicians aren’t so sure. Sen. Dick Durbin of Illinois will hold hearings on the new laws today in the Senate Judiciary Subcommittee on the Constitution, Civil Rights and Human Rights.  South Carolina Sen. Lindsey Graham is the ranking Republican member on that Subcommittee and will attend the hearing.