Amid Protests From Unions, Michigan Becomes A Right To Work State 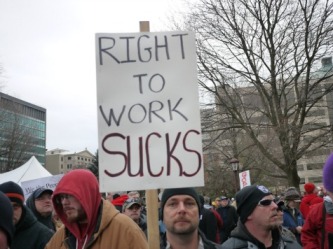 via Matthew Dolan and Kris Maher, The Wall Street Journal

The Republican-led Michigan legislature approved a pair of right-to-work bills, sending them on for the governor’s expected signature, as thousands of union activists continued protesting outside the state capitol.

Two votes in the state House approved bills to allow workers in unionized workplaces in the public and private sector to opt out of paying union dues if they wish. The Senate approved both measures last week.

Michigan’s GOP Gov. Rick Snyder will now have the opportunity to make good on a recent pledge to sign legislation that would allow most workers to opt out of paying union dues. He says he will sign them into law as early as Wednesday.

The Michigan House of Representatives approved Senate Bill 116, which covers private unions before 2 p.m. Tuesday. The final vote was 58-52. An earlier approval for public workers came on Tuesday morning amid thousands of protesters amassing in front of the state capitol. Republicans in Lansing appeared to learn lessons from previous fights over the rights of unionized workers. The measure carves out an exception for police and firefighters, key groups that had opposed the elimination of collective-bargaining rights in Ohio when they were targeted.

The law also comes with a spending provision, a political safeguard because bills containing appropriations in Michigan can’t be as easily repealed through referendum.

Now, Michigan union leaders and their Democratic Party allies, their ranks diminished by years of job cuts in the auto industry, are scrambling to counter the threats to their membership, finances and political power. The clash over union rights in Michigan is also drawing the attention of national labor leaders. Teamsters President James Hoffa was in Lansing on Monday to rally with union supporters.

Democrats told Gov. Snyder as recently as Monday that the legislation could set back the state’s progress in efforts to rebuild after the economic pummeling suffered during the recession. Leaders of organized labor contend that it was union concessions that helped revive the Big Three auto makers during the recession.

But the GOP—which took control of the governorship, state legislature and supreme court two years ago—maintains that it was its leadership to cut taxes that turned the state’s $1.5 billion debt into a $457 million surplus to reinvigorate Michigan’s economy.

Passing a right-to-work law in Michigan comes as a deep blow to unions, especially in a state the United Auto Workers union calls home. They see right-to-work as political payback for unions’ traditional support for Democrats.

“These so-called right-to-work laws, they don’t have to do with economics; they have everything to do with politics,” President Barack Obama said in remarks at a union-represented auto plant outside Detroit on Monday. “What they’re really talking about is giving you the right to work for less money.”

Gov. Snyder for most of the two years since his election had sought to avoid a confrontation with the United Auto Workers and other big unions in this historically union-friendly state. Preaching a mantra of “relentless positive action,” the venture capitalist-turned-politician had said until last month that proposals to weaken union power weren’t on his agenda.

Gov. Snyder’s public support for right-to-work measures, announced the same day that Republicans in the legislature launched a one-day drive toward initial passage of the right-to-work bills, blind-sided UAW President Bob King and other union leaders. The governor’s support has also dramatized the shifts in the political landscape not just in this state, but also across the industrial Midwest.

He has angered public-employee unions by pushing for more power to restructure the finances of Michigan’s troubled cities. But until now, he didn’t directly challenge public-union bargaining rights, as Republican governors in Ohio and Wisconsin have done.

“He doesn’t want this to be a part of his legacy,” said Michigan Democratic Rep. John Dingell, the House of Representatives’ longest-serving member. Michigan Democratic Party Chair Mark Brewer said “all legal options are on the table” to reverse the impact of right-to-work legislation.