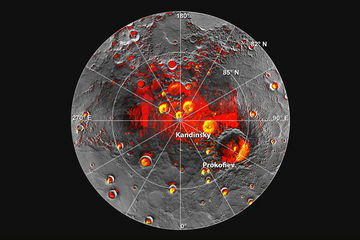 NASA announced Thursday that its Messenger probe has discovered new evidence of water ice on Mercury.

In the announcement, Sean Solomon, principal investigator for the Mercury Messenger program, said the probe had uncovered new evidence that deposits in permanently shadowed regions of Mercury’s poles is water ice. The ice is found predominantly in impact craters, according to data obtained by Messenger.

According to a NASA press release, the tilt of Mercury’s rotational axis is almost zero — less than one degree — so there are pockets at the planet’s poles that never see sunlight. Scientists suggested decades ago that there might be water ice at Mercury’s poles, but the new findings provide “compelling support” for that claim.

“The neutron data indicate that Mercury’s radar-bright polar deposits contain, on average, a hydrogen-rich layer more than tens of centimeters thick beneath a surficial layer 10 to 20 centimeters thick that is less rich in hydrogen,” wrote David Lawrence, a Messenger scientist based at the Johns Hopkins University Applied Physics Laboratory. “The buried layer has a hydrogen content consistent with nearly pure water ice.”

Launched in August 2004, the robotic spacecraft conducted three flybys of Mercury in 2008 and 2009 before entering the planet’s orbit in March 2011.

The probe has collected more than 100,000 images of Mercury, some of which are viewable on NASA’s website.

Messenger, an acronym of MErcury Surface, Space ENvironment, GEochemistry and Ranging, has already changed the way scientists think about the planet closest to the sun.