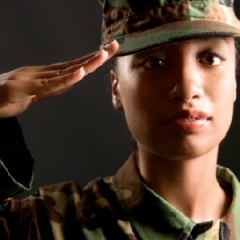 The American Civil Liberties Union and four servicewomen sued the U.S. Defense Department on Tuesday to end a ban on women in combat, calling the military the last bastion of discrimination by the federal government and saying modern warfare has already put women in the line of fire.

The civil rights group argued in a legal complaint filed in federal court in Northern California that the military policy barring women from roles primarily focused on combat solely because of their gender was unconstitutional.

Hundreds of thousands of women veterans returning from wars in Afghanistan and Iraq are finding career paths off limits, sparking the challenge to a policy that has been in place officially since 1994 and unofficially for around two centuries.

“Nearly a century after women first earned the right of suffrage, the combat exclusion policy still denies women a core component of full citizenship – serving on equal footing in the military defense of our nation,” the suit reads.

Military officials say their institution is changing, but that is not fast enough for the returning veterans. The lawsuit, the second this year in federal court, comes a year after the Department of Defense ended restrictions on gays serving openly in the military.

The women challenging the Department of Defense policy flew search-and-rescue helicopter missions and patrolled with male Marines in nominally non-combat counter terrorism job roles. Two of the four were wounded. But they found their work unrecognized when it came to promotions.

“In America today it’s hard to conceive that there are still things you are not allowed to do, just because you are a woman,” Captain Zoe Bedell, a Marine Corps reserves officer who served two tours in Afghanistan, told a news conference.

Her female marines, tasked with engaging with residents in support of male infantry units, found themselves fighting, too.

“They patrolled every day with the infantry, and sometimes twice a day. They lived every day on the same combat outposts in remote corners of Afghanistan. They wore the same gear and they carried the same rifles, and when the unit was attacked, my marines fought back,” she said.

The lawsuit comes as the Department of Defense has slowly been dropping such gender-based restrictions. Under the 1994 policy, women are allowed to serve in combat units as medics, intelligence officers and other jobs at the brigade level.

In February, women were allowed to perform the same job in a battalion, which can be as small as a few hundred troops. The Pentagon dropped restrictions on women serving in units that were required to be based with combat units.

But women are still not allowed in infantry, or in smaller units engaged in combat. Women are barred from more the 238,000 positions, the ACLU said. Nevertheless, in Iraq and Afghanistan, where there are no clear battle lines, women have been pulled into combat in spite of the policy, the group added.

Asked about the lawsuit at a briefing, a Pentagon spokesman said Defense Secretary Leon Panetta remained “very committed to examining the expansion of roles for women in the U.S. military and he’s done so.”

“On his watch, some 14,500, give or take a few, positions have been made available to women. And he has directed the services to explore the possibility of opening additional roles for women in the military,” spokesman George Little said.

“So I think his record is very strong on this issue. The recent openings that I just referred to are merely the beginning and not the end of a process,” he added.

Some defense officials have noted that 10 years of combat had made it clear some gender restrictions were obsolete because battlefields faced by U.S. troops in Iraq and Afghanistan had no clear front lines and no way to eliminate exposure to fighting.

The military has sometimes gotten around the rules by temporarily attaching women to battalions, which allowed them to work in the smaller units but kept them from officially receiving credit for being in combat.

Still, commanders are hampered from using the best people for a given job, and the military as a whole is losing dedicated soldiers, the suit says.

Since combat experience is a factor in promotions and job advancement in the military, women have had greater difficulty than men in moving up to the top ranks, officials said.