Superstorm Sandy’s Impact On The Election 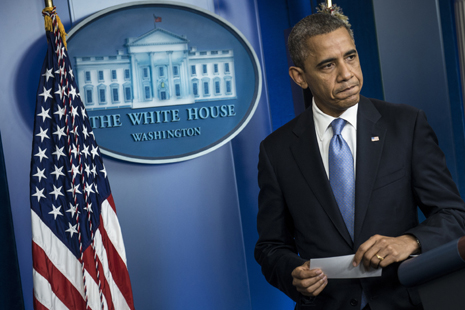 Take your choice. Hurricane Sandy is an advantage for:

— Romney, because it suppresses early voting.

— Obama, because it allows him to look presidential.

— Romney, because it puts Obama on the hot seat.

— Obama, because it reminds people that Romney wanted to privatize the Federal Emergency Management Agency.

— Romney, because it disrupts the vital Obama ground game and could actually reduce voting of all varieties.

Let’s look at these in more depth.

1. Whose momentum? According to the polls, “Mittmentum” had largely dissipated while East Coast skies were still blue. The race has settled to a remarkably stable point – with Obama maintaining a swing-state advantage that looks difficult to overcome. Example: Politico’s latest battleground tracking poll released Monday showed a one-point edge for the president, who had trailed by two a week ago.

2. Early voting. Obama has, by all accounts, rolled up a big lead in early voting so far, so this is a concern for the Obama camp, but not a huge concern because of the luck of the draw. Most of the states affected by Sandy either don’t have early voting (Delaware, Pennsylvania, New York, New Jersey) or only absentee voting with limitations (Virginia) or aren’t swing states (Maryland). Possible exception: North Carolina, but much of the early voting is already done there and Sandy is having a comparatively small impact in the state.

3. Looking like a president. Well, yes. Obama has the ability to lead, and to look like a leader. He spoke to the country early Monday, and he certainly didn’t hurt himself when he said, “I’m not worried about the election right now. I’m worried about families … the election will take care of itself next week.” Romney bringing relief supplies on the campaign bus is a pale substitute and points up just what an advantage the presidency is in this situation.

4. The hot seat. If the federal response is botched, it could hurt Obama fatally. That’s why he must pay close attention and make sure he pulls every lever to deploy aid quickly, consistently, efficiently. The stakes couldn’t be higher for him and for the country.

5. Disaster-relief disaster? Romney did say in a Republican primary debate in June that the Federal Emergency Management Agency should be abolished and its responsibilities either sent to the states or privatized. Like many of those primary campaign statements, he’d like to have that one back. Given the opportunity Monday morning, he did not walk back from it, telling the Huffington Post that states “are first responders and are in the best position to aid impacted individuals and communities.” True, but billions in federal aid are hard to substitute on the statewide level.

6. The ground game. This is by far the biggest question mark, because in a race as tight as this one, the Democrats simply must get out the vote. If this storm had come even three or four days later, the impact on election day could have been much greater, but it may still be significant. One thing to remember: While it’s axiomatic that Republicans will vote come hell or, yes, high water, in this case simple logistics could affect the GOP turnout as well.

What does it all mean? It’s too soon to judge the overall impact because it depends on things we don’t know yet – the level of destruction and the way Obama and the government respond. The election is Obama’s to lose, but it has been for a long time. Probably the storm’s biggest impact is to negate final-week TV assaults because ad buys will scale way back as nobody wants to see an attack ad sandwiched between hurricane horrors. It will push the status quo forward into the final weekend. There are differing views, of course, on what that status quo is, but the swing-state polling would indicate it’s a plus for the incumbent.