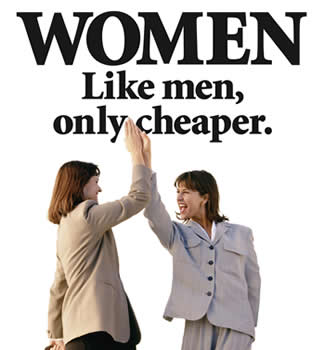 When 24-year-old preschool teacher Katherine Fenton stood up at the second presidential debate and asked the candidates what they planned to do about the gender wage gap, both candidates dodged the question, and conservatives collectively rolled their eyes at the mention of one of their least favorite of the Democrats’ talking points. But lost in the election season banter over women’s issues is the fact that pay equity, if taken seriously, could stimulate the economy to at least twice the degree that President Barack Obama’s 2009 stimulus bill did.

According to a new study by the American Association of University Women, a woman who graduates from the same school and in the same major as her male classmate and takes a full-time job in the same occupation as he does earns an average 7 percent less than him one year out of school. That gap widens the longer a woman works, so that over the course of her 35-year career, a woman with a college degree will make an average of $1.2 million less than a man with the same level of education.

If that gap were to close and women were to be paid the difference, economist Heidi Hartmann, president of the Institute for Women’s Policy Research, estimates that the stimulus effect would grow the U.S. economy by at least three to four percentage points. The $800 billion economic stimulus package that Congress passed in 2009 to bail banks out of the recession, by contrast, is estimated to have grown the GDP by less than 1.5 percent overall.

“That’s a pretty good-sized stimulus,” Hartmann told The Huffington Post. “We’d love to have that kind of growth right now.”

The growth estimate gets larger, Hartmann said, if you consider how many women would be drawn into the workforce as a result of the pay increase and the additional capital that could be spent on women-owned businesses, which have an economic impact of about $3 trillion in the U.S.

“If you expand women-owned businesses, you might be driving more capital into smaller, more productive businesses and away from large businesses or other kinds of capital pursuits,” she said. “You can assume that workers, especially women who have lower incomes, tend to spend more of their money and be more of a stimulus. Small businesses getting more capital would have a stimulus effect for their local communities as they tend to invest and spend more locally than larger businesses.”

Women are also more likely to personally stimulate the economy by spending the additional income they receive, says economist Evelyn Murphy, a resident scholar at the Women’s Studies Research Center at Brandeis University and former Lieutenant Governor of Massachusetts.

“The cumulative effect of closing the wage differential would be huge,” she said in an interview with The Huffington Post. “Women who are paid fairly and paid what they’re worth will likely spend that money to support themselves and their families, because so many women live in poverty and need every penny they get in their paychecks. So the turnover effect could be extremely important in terms of products purchased and jobs created.”

Women currently make up 70 percent of Medicaid recipients and 80 percent of welfare recipients, but closing the wage gap would allow them to be less reliant on federal assistance, Hartmann said. Moreover, paying women more would give them a bigger financial incentive to enter the workforce. A 2011 McKinsey study found that by increasing the workplace participation rate of women in each state from 76 percent, where it is now, to 84 percent, which is the rate of women’s participation in Sweden, the U.S. could add 5.1 million women to the workforce. This would be equivalent to adding 3 to 4 percent to the size of the US economy.

“If you’re not using your human resources to your full capacity, you’re leaving money on the table,” Hartmann said.

One step toward closing the wage gap is holding employers accountable for gender pay discrimination. The Lilly Ledbetter Fair Pay Act, which is the first bill Obama signed as president, expands the avenues by which women can sue their employers for equal pay. The bill has helped women to obtain more than $60 million in monetary relief for sex-based wage discrimination since 2010, but it does not do much to address the underlying problem.

The Paycheck Fairness Act, sponsored by Sen. Barbara Mikulski (D-Md.) and Rep. Rosa DeLauro (D-Conn.), contains more fundamental reforms than the Lilly Ledbetter legislation, but it was blocked in June by Senate Republicans. That bill would require employers who are paying women less than men for equivalent work to defend that difference by citing a legitimate and measurable reason other than gender, such as education, training or experience. It would also allow employees to disclose salary information with each other so that women can be more aware of when they’re being discriminated against, and it would prevent employers from retaliating against women who raise pay equity issues.

Republicans typically oppose equal pay legislation because they argue that it interferes with the operation of the labor market. “I don’t know that it’s appropriate for the government to continue to micromanage the workplace,” said Ovide Lamontagne, Republican nominee for governor in New Hampshire, in response to a question from ThinkProgress about pay equity earlier this week.