Is A Deadlocked Election Really Possible? 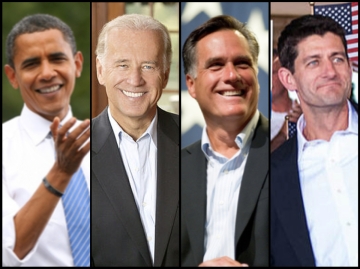 The most likely result on Nov. 6 will be a clear, if close, victory for President Barack Obama and Vice President Joe Biden or Republican Mitt Romney and his running mate, Paul Ryan.

But with surveys showing the presidential candidates running neck-and-neck just 2-1/2 weeks before Election Day and a number of battleground states still in play, a less straightforward outcome seems more possible.

One candidate could win more of the popular vote, but lose in the Electoral College, as when Republican George W. Bush defeated Democrat Al Gore 12 years ago after a bitter legal fight that went to the U.S. Supreme Court.

Or Obama and Romney could each win 269 of the 538 electoral votes divided between the states.

That would throw the outcome of the presidential race into the House of Representatives, which must name the president in the case of a tie. Republicans are expected to keep control of the House in the election, which would almost certainly mean a Romney victory.

But the vice presidency would be decided in the U.S. Senate, where Democrats currently have a majority. If they retained control, Biden would likely be selected. Republicans likely would have to win control of the Senate for Ryan to become vice president in a deadlocked election.

A further wrinkle is that the sitting vice president breaks tie votes in the Senate, meaning Biden could be in a position to cast the deciding vote for vice president in such a scenario.

“In the end, the odds still favor the popular and electoral vote heading in the same direction, but the chances of a split like the one in 2000 are very real, along with the distinct possibility of ambiguity and vote-counting issues once again putting the outcome in question,” Charlie Cook, editor of the Cook Political Report, wrote in a column in the National Journal.

A prolonged legal fight, or a split administration could worry investors and worsen the political gridlock in Washington.

Both would be huge obstacles to dealing with the “fiscal cliff,” the $600 billion in spending cuts and tax increases that could occur at the end of the year if lawmakers fail to reach an accord on shrinking the federal budget deficit.

The bitter legal battle over the 2000 election lasted to mid-December, when the U.S. Supreme Court issued a ruling that gave Bush the White House. The divisions contributed to the partisanship that remains in Washington and state governments.

The Obama and Romney campaigns have been lining up legal teams in preparation for possible litigation after a close race, especially in light of new election laws approved by Republican-led legislatures in over a dozen states since 2010.

U.S. presidential elections are decided not by a winner-take-all national popular vote as in many countries. Instead, candidates compete in a system of state-by-state contests to win the 538 “electoral votes” assigned to the 50 states and Washington, D.C.

The votes are assigned roughly according to population. But since there is a minimum of three per state, they are assigned disproportionately, increasing the likelihood of a difference between how the electoral and popular votes come out.

A candidate has won the popular vote but lost in the Electoral College in three of the 56 U.S. presidential elections.

There is also a historical precedent for a divided administration, albeit in the rather remote past.

“It would be kind of similar to what happened to (John) Adams and (Thomas) Jefferson,” Villanova University political scientist Lara Brown said, referring to the second and third presidents of the United States, more than two centuries ago.

In 1796, Adams ran for the presidency as a Federalist. Jefferson, a Democratic-Republican, was one of his opponents. There was not yet any such thing as a “running mate.”

When the votes were counted, Adams was first and became president. Jefferson, second, became vice president and spent his terms attacking Adams’ policies.

The discord helped pave the way for the 12th Amendment to the U.S. Constitution, which established the procedure for electing the top two government officials, starting in 1804.

It prevented another divided administration for 207 years.

It will be clear in a few weeks whether that run of success will continue.