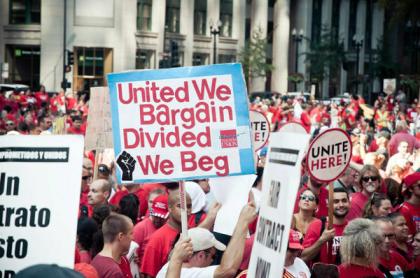 Dozens of churches and community organizations also were opening their doors to students for at least part of the day.

John Harvey and Sarah Vanderstow were dropping off their 7-year-old son, Aiden, at the Disney Magnet School, but they were nervous because it was unfamiliar to the second-grader, the Tribune reported.

Vanderstow said they had no choice because their usual school, Nettelhorst, was closed.

“I don’t know who these people are who will be watching him and that concerns me,” she said, according to the Tribune. “But I have to go to work and we can’t afford to pay for him to go somewhere else all day.”

Another parent, Vicente Perez, who spoke to the Tribune decided against dropping his fourth- and sixth-grade sons at a contingency location when he realized they would have to cross a line of picketing teachers, which scared the boys. Perez and his wife decided to take their children to a church—some of which had opened their doors to help out with the displaced students—or just keep them home, the report said.

After a violent Chicago summer, police Supt. Garry McCarthy said he was “emptying our offices” to patrol the picket lines, secure contingency sites and keep an eye on unsupervised kids on the streets.

The talks broke down not over pay, but over the reform agenda, Reuters reported, citing sources on both sides. The union opposed a proposal to make student test scores a key factor in teacher evaluations, the report said.  They also opposed a move to give principals more control over hiring, which could undermine the seniority system that protects long-time teachers.

“We have failed to reach an agreement that will prevent a labor strike,” Chicago Teachers Union President Karen Lewis said.