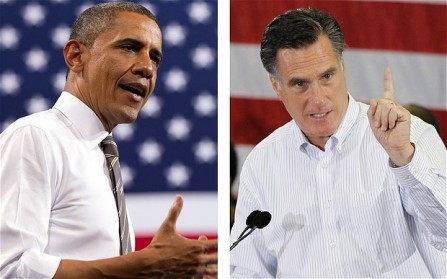 Voters in this presidential election may face the starkest choice ever on the hot-button social issues of same-sex marriage, abortion rights and access to birth control.

Even as most voters tell pollsters the economy is their chief concern, advocacy groups on the left and right are in high gear — with bus tours, YouTube videos and fundraising — pointing out the sharp differences between the parties in the current phase of the culture wars.

Indeed, President Barack Obama and the Democratic Party seem increasingly eager to raise these issues proactively. They are touting their support for same-sex marriage and accusing the Republicans of waging a “war on women” by opposing abortion rights and federal programs to boost women’s access to birth control.

Republicans have responded by accusing the president and his party of waging a “war on religion” via the portion of Obama’s health care law that requires contraceptives to be available for free for women enrolled in workplace health plans. Many Roman Catholic and evangelical voters contend that this mandate violates religious freedom because some faith-affiliated employers would have to comply.

Such wedge issues can be pushed to the forefront of the campaign unexpectedly. That occurred this week when the Republican Senate nominee in Missouri, Rep. Todd Akin, referred to women’s bodies as being able to prevent pregnancies if they are victims of “a legitimate rape” while explaining why he opposed abortion in all circumstances. Republicans as well as Democrats criticized Akin severely.

Obama called Akin’s views “offensive” and said the idea of distinguishing among types of rape “doesn’t make sense to the American people and certainly doesn’t make sense to me.” Republican candidate Mitt Romney called Akin’s comments “insulting, inexcusable and frankly wrong.” While Akin apologized and said he would remain in the race, GOP officials made it clear they wanted him to quit.

The upcoming nominating conventions will highlight the contrasts between the parties on abortion and other issues.

The platform for the Democratic National Convention is expected to put the party on record, for the first time, in support of same-sex marriage, echoing the stance taken by Obama in May.

Romney and his newly chosen running mate, Rep. Paul Ryan of Wisconsin, favor a constitutional ban on same-sex marriage. The speaker list for their convention includes former Sen. Rick Santorum, a hardline opponent of abortion and gay marriage, and Mike Huckabee, who recently helped engineer an “appreciation day” for the Chick-fil-A fast-food chain after gay-rights groups protested its president’s stance against gay marriage.

The nationwide show of support produced record sales, according to Chick-fil-A.

Ryan, though best known for his economic proposals, is at least as conservative as Romney on social issues. He has voted against allowing same-sex couples to adopt and opposed repealing Don’t Ask Don’t Tell, the ban on gays serving openly in the armed forces.

Ryan, who told the Weekly Standard in 2010 that he was “as pro-life as a person gets,” has earned perfect scores from the National Right to Life Committee and other anti-abortion groups. He co-sponsored measures asserting that life begins at the moment of fertilization and — like Romney — favors repeal of the Supreme Court’s 1973 Roe v. Wade ruling that established a right to abortion.

“Make no mistake about it: Ryan is 100 percent behind the war on women agenda,” said Nancy Keenan of NARAL-Pro Choice America.

Social conservatives welcomed Ryan’s selection, even though it remains to be seen how outspoken he’ll be about various hot-button topics.

Some political analysts suggest that the Democrats might see an advantage in shifting the campaign conversation away from jobs and toward divisive social issues.

“Social issues are the best ammunition the Obama campaign has to pull independents away from Romney,” conservative columnist Kathleen Parker wrote this week. She faulted the GOP for giving too much power to “a certain faction that insists on purity pledges.”

The presidential race is not the only one where a culture clash is at hand this year. Four states have gay-marriage measures on their ballots. In Minnesota, the vote is whether to put a ban on gay marriage in the state constitution, while voters in Maine, Maryland and Washington will decide whether to legalize gay marriage.

National gay-rights groups are pumping millions of dollars into these state campaigns, hoping to end a long losing streak. Thus far, gay marriage has been rebuffed in all 32 states that have held referendums on the issue.

Meanwhile, the federal Defense of Marriage Act, which denies federal recognition of same-sex marriages and affirms the right of states to refuse to recognize such marriages, is under criticism in courts. Several federal judges have ruled it unconstitutional.

The Obama administration is no longer defending the act, and has asked the Supreme Court to settle the legal fights over it.

Robert George, a conservative professor of jurisprudence at Princeton University who opposes same-sex marriage, said the issue could be pivotal in a few crucial swing states where a majority of voters in the past have endorsed bans on gay marriages. Among them are Virginia, North Carolina, Florida and Ohio.

“Back in 2008, Obama was able to keep the issue out of the campaign, as he wanted to do,” George said. “Now it will be an issue. Romney’s position is clear and consistent, and there’s a big distinction between the candidates.”