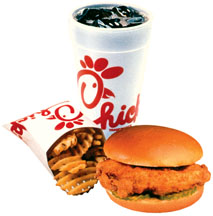 Thousands of people across the United States heeded the call of two former Republican U.S. presidential candidates to eat at Chick-fil-A on Wednesday to show support for the chain restaurant as it weathers criticism for its president’s public opposition to gay marriage.

Business was so brisk at some of the privately owned chain’s more than 1,600 locations that employees directed traffic in parking lots, lines remained long well past the lunch hour, and managers spoke of record sales.

“I don’t believe in same-sex marriage. It’s wrong,” said Patricia Shelton, 53, after visiting a Chick-fil-A in Winston-Salem, North Carolina, a state where voters approved a constitutional ban on gay marriage earlier this year.

“We’ve got to take a stand,” Shelton said.

Chick-fil-A, known for its chicken sandwiches and waffle fries and for being closed on Sundays, came under fire after its president, Dan Cathy, told an online religious newspaper that he supports “the biblical definition of the family unit” and that supporters of gay marriage were “arrogant”.

Conservative former presidential candidates Mike Huckabee and Rick Santorum said those who agreed with Cathy should send a message about “traditional values” by eating a meal on what they dubbed “Chick-fil-A Appreciation Day.”

Gay marriage supporters have pushed for a boycott of the chain and are seeking to block new Chick-fil-A outlets from opening. The mayors of Chicago and Boston have spoken out against the company, and same-sex couples around the country plan a kiss-in at Chick-fil-A restaurants on Friday.

While some patrons said they visited the chain on Wednesday simply because they like the food, others at busier-than-usual locations from suburban Philadelphia to cities across the Southeast said they came to support Cathy’s stance and his right to voice it.

“We’re Bible-believing Christians,” said Bethany Hill, 35, at a Chick-fil-A in Trevose, Pennsylvania. “We’re thankful that he decided to stand up.”

“You should have the right to say your opinion without being penalized,” said Lillian Somers, 78, at a Chick-fil-A in Birmingham, Alabama. “I am tired of people trying to force their beliefs on me and people being blasted for Christian beliefs.”