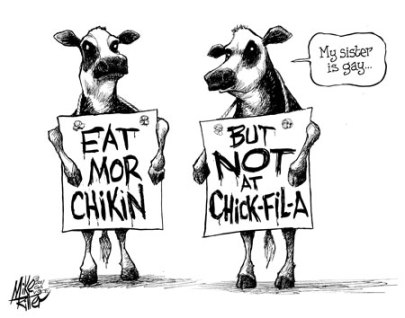 Chick-fil-A’s anti-gay marriage stance has gotten some high-profile support by way of Mike Huckabee, Rick Santorum, Sarah Palin and other conservative lawmakers. But among their longtime customers, it’s a much different story.

Polling organization YouGov found that the Atlanta-based chain’s brand approval ratings have plummeted in the wake of Chick-fil-A President Dan Cathy’s controversial remarks earlier this month. YouGov also reports that the company’s overall consumer brand health among fast food eaters has dropped to its lowest levels since mid-August 2010 in the wake of the media firestorm.

Among the other brands ranked in the Top National QSR sector are Pizza Hut, Taco Bell, KFC, Burger King and McDonald’s, the Gay and Lesbian Alliance Against Defamation (GLAAD) noted.

Among those not surprised by the plunge was Aaron McQuade, Director of News and Field Media at GLAAD, who called the results “reflective of an America that values and respects its LGBT neighbors and rejects rhetoric like Dan Cathy’s that seeks to demean and dehumanize the LGBT community.”

Although Chick-fil-A’s financial contributions to anti-gay organizations like Exodus International and the Family Research Council have been well documented over the years, Cathy’s somewhat glib confirmation of the reports (“Well, guilty as charged”) in a July 16 Baptist Press interview has since sent both the media and a number of LGBT advocacy groups into overdrive.