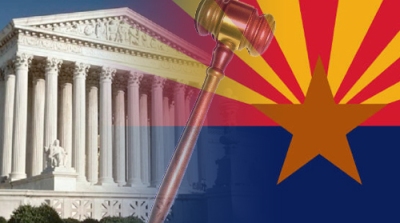 via Jess Bravin and Miriam Jordan, The Wall Street Journal

The Supreme Court upheld a key part of Arizona’s tough-immigration law but struck down others as intrusions on federal sovereignty, in a ruling that gave both sides something to cheer in advance of November elections where immigration is a major issue.

The court backed a section of the Arizona state law that calls for police to check the immigration status of people they stop.

Five justices were in the majority choosing to strike down the three provisions. Dissenting justices argued that the whole law should have been upheld.

Lower federal courts blocked the four provisions from taking effect after Republican Gov. Jan Brewer signed the measure in 2010. The courts agreed with the Justice Department that the undermined federal authority over immigration.

The law is part of the broader national debate over immigration, which heated up last week when President Barack Obama and Republican rival Mitt Romney spoke before a group of Hispanic officials.

Mr. Obama touted his announcement the previous week that his administration will stop deporting many young illegal immigrants, while Mr. Romney used his speech to soften his tone on immigration and call for a long-term overhaul that would allow more newcomers to receive green cards. The candidates are both stepping up their appeals to the fast-growing bloc of Hispanic voters.

Democrats have accused the Arizona law’s supporters of having an anti-immigrant agenda, while the law’s mostly Republican backers say they want to secure the nation’s borders.

Arizona’s illegal-immigration measure, officially titled the Support Our Law Enforcement and Safe Neighborhoods Act and known as SB 1070, reflected outrage among tea-party conservatives over what they considered lax enforcement by federal immigration authorities.

Similar laws were introduced in other states, including Alabama, which recently drew unwelcome attention when executives from German and Japanese car makers that the state had pushed to bring there were arrested for failing to produce immigration papers.