The House Bills To Nowhere 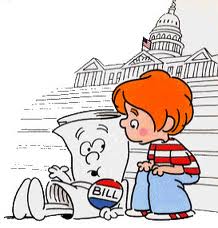 via The Editorial Board, The New York Times

This is now the pattern of business in the House of Representatives: Spend most of the time passing bills designed not to become law but to satisfy the ideological desires of conservative voters. And block laws that actually need to get passed.

This colossal waste of time, punctuated by moments of real destruction, has been going on since early last year, and is well-illustrated this month. The House voted last week to repeal crucial parts of the health care reform law, and an upcoming bill would make government regulation virtually impossible. None of these bills have a chance of enactment. In the meantime, though, House Republicans won’t bring up a desperately needed transportation bill.

Political-message bills have sprouted like weeds in the last few years, the product of extreme polarization and stalemate. Elected officials have to show that they’re doing something, so they propose bills designed only to create a talking point against the other side. Senate Democrats do it, too. The Paycheck Fairness Act, which was predictably filibustered to death by Republicans, was the latest example. We supported that bill as an important vehicle for reducing the wage gap between men and women, but the principal reason Democrats introduced it was to embarrass Mitt Romney and other Republicans over their pronounced indifference to the issue.