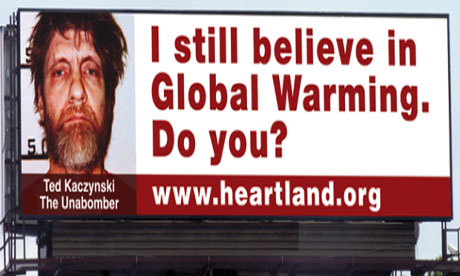 via Suzanne Goldberg, The Guardian

The ultra-conservative Heartland Institute admitted it was in financial crisis on Wednesday, with the flight of corporate donors making it difficult to pay staff or cover the costs of its annual conference aimed at debunking climate science.

In a speech at the close of this year’s climate conference, Heartland’s president, Joseph Bast, acknowledged that a provocative ad campaign comparing believers in human-made climate change to psychopaths had exacted a heavy cost.

However, Bast also attributed Heartland’s current problems to his weakness in financial management.

“These conferences are expensive, and I’m not a good fundraiser so as a result I don’t raise enough money to cover them. We really scramble to make payroll as a result to cover these expenses,” Bast said.

“If you can afford to make a contribution please do. If you know someone, if you’ve got a rich uncle or somebody in the family or somebody that you work with, please give them a call and ask them if they would consider making a tax-deductible contribution to the Heartland Institute.”

The organisation has lost at least $825,000 in funds from corporate donors although Heartland also claims to have attracted 800 new small donors. Heartland also came in for bruising criticism from its own allies – a number of whom faulted Bast for failing to consult Heartland’s colleagues or board members about the ads in advance.

Among ultra-conservative activists, the billboard controversy has shaken confidence in Heartland’s ability to serve as the hub of the climate contrarian network. It has also raised doubts about Bast’s leadership. Bast is listed on Heartland’s website as its earliest employee. His wife is also employed at Heartland.

« The Creative Monopoly
Can Mexico’s Presidential Hopefuls Stop the Bodies Piling Up? »