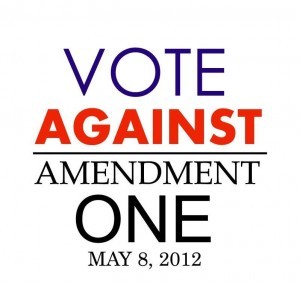 The wife of a North Carolina state senator reportedly told poll workers during early voting Monday that an amendment sponsored by her husband was intended partially to protect the Caucasian race.

Jodie Brunstetter is the wife of state Sen. Peter Brunstetter (R), a supporter of Amendment 1, which would change North Carolina’s Constitution to permit only heterosexual marriage.

According to the alternative Yes! Weekly, writer and campaigner Chad Nance spoke to a pollworker who told him that Jodie Brunstetter said, “The reason my husband my husband wrote Amendment 1 was because the Caucasian race is diminishing and we need to uh, reproduce.”

Nance has volunteered for a group working to defeat the marriage amendment and was until recently the campaign manager for a Democratic candidate for Congress. Nance resigned from the campaign to speak about Jodie Brunstetter’s alleged remarks, according to Yes! Weekly.

Nance also spoke to Jodie Brunstetter, who said that she had used the word “Caucasian” in discussing the amendment, but that her remarks were taken out of context.