Former GOP Congressman On Fair Pay Act: ‘That Thing Is A Nuisance’ 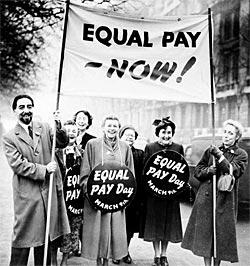 Former Republican congressman Pete Hoekstra, who is now running to unseat Sen. Debbie Stabenow (D-MI.), weighed in on the Lilly Ledbetter Fair Pay Act on Thursday, saying the law was a “nuisance” that shouldn’t be in place.

The issue came up during a campaign event in Royal Oak, Mich. An attendee asked whether Hoekstra would support or “work to repeal” the law if elected to office.

“Will, you know, will repealing it be a priority? If you came back and said, you know, that’s really the thing that’s hurting my business the most. My guess is there are other things that we can do that have a higher priority in terms of what I, what I believe might need to be done. I think you know we need to create — that thing is a nuisance. It shouldn’t be the law,” replied Hoekstra.

Obama signed the Lilly Ledbetter Fair Pay Act into law in 2009 and considers it one of the key achievements of his presidency. The law – which was heavily opposed by Republicans – provides women with more legal channels through which to pursue equal pay for equal work. Hoekstra, at the time a congressman, voted against the measure when it came up in the House of Representatives.

“It’s insulting to women and their families that Pete Hoekstra thinks a law that guarantees equal pay for equal work is a nuisance and should be repealed,” said Mark Brewer, chair of the Michigan Democratic Party. “When women are discriminated against, and paid less for the same job, it damages our economy and our community. Repealing this absolutely critical protection for women would be yet another blow against middle class families fighting to make ends meet.”