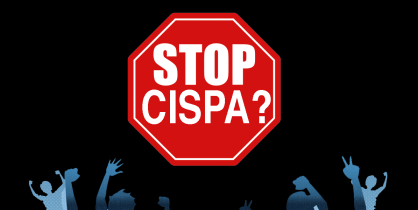 In spite of their hopes, Internet activists are finding that their efforts to keep the digital world free of further regulation did not end with SOPA’s defeat.

The Cyber Intelligence Sharing and Protection Act of 2011 is working its way through Congress, and is the latest proposed legislation to raise concerns among privacy activists. Introduced in November by Rep. Mike Rogers (R-Mich.) and Rep. Dutch Ruppersberger (D-Md.), the stated goal of CISPA is to create new channels for communication between government intelligence entities and private firms regarding potential and emerging cyber-security threats.

The communication would deal primarily with what the legislation deems “cyber threat intelligence,” which it defines as “information in the possession of an element of the intelligence community directly pertaining to a vulnerability of, or threat to, a system or a network of a government or private entity.”

The threats listed under the umbrella of cyber-threat intelligence include “efforts to degrade, disrupt or destroy” systems or networks, as well as “theft or misappropriation of private or government information, intellectual property or personally identifiable information.”

It’s the inclusion of intellectual property that’s a major point of contention for those looking at the bill’s broad language with a skeptical gaze. Many fear that CISPA is essentially a retooled version of SOPA, which was taken off the table in Congress after a concentrated effort by Internet giants such as Google, Wikipedia and Reddit, which either supported or held blackouts in protest of the bill.

Rainey Reitman and Lee Tien of the Electronic Frontier Foundation released a statement outlining their concerns about the inclusion of intellectual property in CISPA.

“It’s a little piece of SOPA wrapped up in a bill that’s supposedly designed to facilitate detection of and defense against cybersecurity threats. The language is so vague that an ISP could use it to monitor communications of subscribers for potential infringement of intellectual property. An ISP could even interpret this bill as allowing them to block accounts believed to be infringing, block access to websites like The Pirate Bay believed to carry infringing content, or take other measures provided they claimed it was motivated by cybersecurity concerns.”

Its supporters paint CISPA in another light, framing it as an essential national security safeguard and a shield against the continued targeting of U.S. businesses by “nation-state actors like China,” according to Rogers.

“Without important, immediate changes to American cybersecurity policy, I believe our country will continue to be at risk for a catastrophic attack to our nation’s vital networks – networks that power our homes, provide our clean water or maintain the other critical services we use every day,” Ruppersberger said in a statement celebrating the bill reaching 105 co-sponsors.

CISPA has the support of organizations that include AT&T, Facebook, IBM, Microsoft, Oracle, Symantec, the U.S. Chamber of Commerce, Verizon, with Facebook sending over a particularly supportive letter of endorsement.

« Ron Paul Is Still In It To Win It
Wanted: Jobs For the Next Generation »