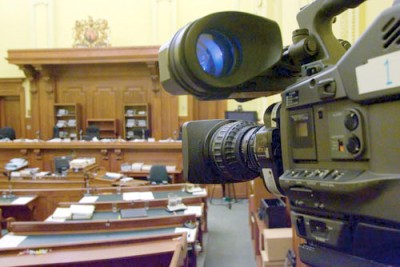 A judge in northwestern Illinois made an announcement Friday that could forever change the way the media covers criminal trials in the state.

In January, the Illinois Supreme Court approved heightened media access to criminal proceedings, including video recording, on an experimental basis. The justices believed that allowing the public to see what happened during these trials would increase transparency — and in Morrison, Ill. Friday, Judge Jeffrey O’Conner said he would take advantage of that ruling.

Overruling objections from both prosecutors and the defense, who had argued that cameras would allow for inflated media coverage, undermining the possibility of selecting an impartial jury, O’Conner said he would allow the media to record accused serial killer Nicholas Sheley’s trial, the Associated Press reports.

Sheley’s lawyer’s told Judge O’Connor that the public’s animosity towards their client could compromise their case, according to the Quad City Times. O’Connor responded by moving the trial date from March 5 to June 11 to allow both sides more time to prepare.

“I don’t think having extended coverage in this trial…will make one bit of difference,” O’Connor said, according to the AP. The judge also argued that he believes the jury will maintain their objectivity.

“Nobody will be more aware of the gravity [of the situation] than the people sitting over there in the jury box,” O’Connor said, according to the AP. “We just can’t assume that the people in that jury box have lived in a vacuum.”

This assertion could be precedent-setting in Illinois if Sheley’s trial produces a ruling perceived to be unbiased in spite of the cameras.

Sheley has already been convicted of killing Ronald Randall, 65, of Galesburg, Ill. in 2008, and was sentenced to life in prison. He now faces trial for the murder of 93-year-old Russell Reed in his hometown, Sterling, at the Whiteside County Circuit Courthouse.

Sheley stands accused of six other murders that have not yet been prosecuted.

Illinois had previously joined 13 other states in banning cameras from recording criminal trials, although cameras were allowed to record proceedings in the state Supreme and Appellate courts, according to CBS Chicago.

If the experimental period of lax recording policies is determined not to interfere with trial proceedings, the policy will likely become a standard in Illinois criminal courts. Chief Justice Thomas Kilbride told the Illinois Statehouse News shortly after the Supreme Court ruling that “opening up” the courts would allow for more transparency.

“By having the public keeping an eye on what is going on in the courtroom, it can act as a check in the balance of power,” Kilbride told the newspaper.