Obama Has It Right On Birth Control 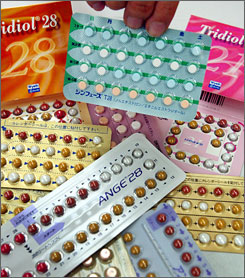 I can’t believe that I actually agree with something President Barack Obama has done. Granted, I’m one of those conservatives who has never subscribed to the full-meal-deal checklist, preferring to critically consider whether each of my positions is the most logical and sensible given the available information and my own values. Usually that process results in coming down on the “right” side of things. In this case, though, I somehow find myself in the odd position of agreeing with Obama and being rather miffed at his opponents.

The president’s new birth control plan would insure coverage of women’s birth control without copayments or deductibles. Sounds fair, especially given that men’s anti-impotence Viagra treatments have been covered by insurance plans for years.

Some, including CNN’s Jack Cafferty, have argued that impotence is a medical condition but birth control for women is optional. Really? This implies that sex for men is mandatory at all costs — to the point of paid hydraulic assistance, if necessary — yet women should be able to take it or leave it. But pregnancy is a medical condition — one that some of us want to avoid as much as men do impotency. And in neither case is “just don’t have sex” a realistic solution for any halfway normal human being with reproductive drive in its prime.

Others argue that men aren’t getting their birth control paid for, so why should women get theirs covered? News flash: It’s the woman’s inescapable lifelong burden. Women have babies, regardless of whether the man sticks around. If she gets pregnant, the costs are hers to bear — or, if she can’t manage, the state’s. A few extra dollars invested to prevent the creation of future welfare recipients — not to mention abortions — seems like a good trade-off.

Leave it to Facebook, that Petri dish of blowhards, to unveil some doozy responses, like, “Most women on birth control still get pregnant, so this is a waste of money.” Given that women can live their entire lives on birth control and never end up pregnant, I’ll just go ahead and call you-know-what on that.

Another added, “Taking birth control to prevent pregnancy is like wearing a bulletproof vest to prevent yourself from getting murdered.” Guess what? If a “bullet” gets through with one form of birth control, there’s another called the morning-after pill that will prevent it from doing “full damage,” if you get my drift. Which is all the more reason to ensure its accessibility.

Yet another argument was, “Why do I have to pay for other people’s sex?” Look, by joining a health plan — privately managed or otherwise — you’re already paying for other people’s smoking, sex or lack thereof, alcohol overconsumption, poor food choices and so on. What does it matter if you’re paying for the schmuck down the street to shove that extra doughnut into his face or for a college student to have safe sex? If any religious entities object to birth control for women they don’t know or support, perhaps they could first decline tax exemptions on the basis of benefiting from the same public pool into which these same women pay taxes?

Speaking of which, it’s the 21st century.

Can we not accept that both men and women are driven by sex as much as by food, and that any differentiation between the genders in this area has long been socially mandated through shaming and derogatory labeling of women who enjoy this very basic human and survivalist drive as much as men do? It’s difficult enough for society to collectively accept sex as being just as normal as eating — but it is. Both are basic, innate pleasures of being human. Yet we’re bombarded with food shows, food magazines, food discussion forums, food classes, endless food banter at house parties. Just try doing any of that with sex in polite company. Food and sex are on exactly the same level for us as human beings in our basic drive for survival.

There’s still an overall taboo around sex that promotes rampant ignorance and prohibits rational consideration of its rightful place in our lives.

One thought on “Obama Has It Right On Birth Control”