Reclaiming the Rhetoric of ‘Family’: Three Reasons Why Same-Sex Marriage Recognition in the Military Matters 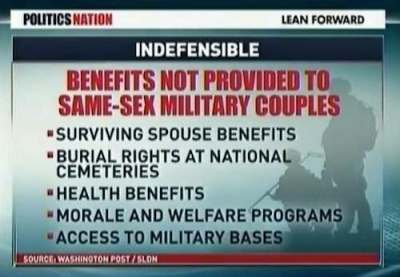 OutServe, the association of actively serving LGBT military personnel, issued a press release Thursday announcing the Our Families Matter campaign and a Capital Summit in May to address support for military partners and families.

As of Sept. 20, 2011, the military may not be able to discharge gay servicemembers, but they’re still allowed to pretend like their families don’t exist. The Defense of Marriage Act prohibits federal recognition of same-sex military spouses and subsequently denies the robust partner and family benefits program offered to these servicemembers’ straight counterparts.

According to the Servicemembers Legal Defense Network, same-sex military couples do not have access to over 100 distinct benefits, including medical and dental insurance, increased housing allowance, relocation accommodation, and surviving spouse benefits.

However, Department of Defense regulations also allocate a number of other benefits using a definition of “family” that they craft internally — and which currently excludes those formed around same-sex partnerships. Such benefits include joint duty assignments; access to morale, welfare, and recreation programs; and access to commissaries and other on-post facilities, and are not affected by the provisions of DOMA. DoD is able to provide these benefits to same-sex military couples independent of Congressional DOMA proceedings.

It’s contrary to military values and therefore to the strength of the nation if military families aren’t taken care of. But let’s transition here.

Why Do Military Families Matter to the Rest of the LGBT Movement?

1) First and most obviously, military families are setting the stage for DOMA repeal.

Before the repeal of DADT was even implemented, congressional allies were asking how same-sex military families were affected by the Defense of Marriage Act. At the first congressional hearing since DOMA’s implementation in 1996, Senator Feinstein pointed out that DOMA bars the spouse of a gay or lesbian service member or veteran from being buried with him or her in a veterans’ cemetery.

Heart-wrenching narratives that display gross injustices against American soldiers will challenge the Republican moral fiber. A purely LGBT initiative can be ignored by the right wing; the story of a sacrificed servicemember cannot.

2) The recognition of same-sex spouses and their families proves that “homosexuality” isn’t (just) about the sex.

Whether referencing sodomy, sexual deviancy, or pedophilia, language used to describe gays and lesbians throughout history have placed emphasis on the sexual component of same-sex relationships. One of the most famous attempts to take on such a task was the homophile movement in the 1950s and ’60s. The term literally means loving the same sex. Obviously, Average Joe hasn’t heard of the term “homophile,” and he probably uses the term “homosexual,” indicating that the movement failed in the respect. Essentially, there is much work to be done in order to dismantle the association of gays with perversion.

3) Same-sex marriage recognition in the military reclaims (and possibly neutralizes) the term “family.”

It’s far too often that we hear Republican candidates (can you guess which GOPer this hyperlink goes to?) toss around the word “family” as a euphemism for anti-gay sentimentality. If the military — as one of the most family-oriented institutions in American society — recognizes same-sex families as legitimate, then others will inevitably do so, as well. Again, families are “the strength of our nation.” If gays are included in this military definition of family, I would consider that a step up from the classification of “pervert” and “sexual deviant.”