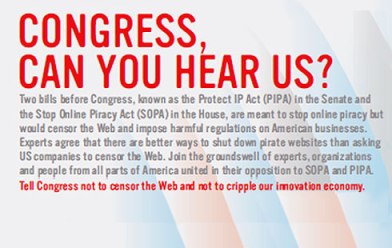 Lawmakers stopped anti-piracy legislation in its tracks on Friday, delivering a stunning win for Internet companies that staged an unprecedented online protest this week to kill the previously fast-moving bills.

Senate Democratic leader Harry Reid said he would postpone a critical vote that had been scheduled for January 24 “in light of recent events.”

Lamar Smith, the Republican chairman of the House of Representatives Judiciary Committee, followed suit, saying his panel would delay action on similar legislation until there is wider agreement on the issue.

The bills, known as PIPA in the Senate and SOPA in the House, are aimed at curbing access to overseas websites that traffic in pirated content and counterfeit products, such as movies and music.

The legislation has been a priority for entertainment companies, publishers, pharmaceutical companies and other industry groups who say it is critical to curbing online piracy, which they believe costs them billions of dollars a year.

But technology companies are concerned the laws would undermine Internet freedoms, be difficult to enforce and encourage frivolous lawsuits.

Public sentiment on the bills shifted in recent weeks after Internet players ramped up their lobbying.

White House officials weighed in on Saturday, saying in a blog post that they had concerns about legislation that could make businesses on the Internet vulnerable to litigation and harm legal activity and free speech.

Then on Wednesday, protests blanketed the Internet, turning Wikipedia and other popular websites dark for 24 hours. Google, Facebook, Twitter and others protested the proposed legislation but did not shut down.

In a brief statement on Friday, Reid said there was no reason why concerns about the legislation cannot be resolved. He offered no new date for the vote.

Reid’s action comes a day after a senior Democratic aide, speaking on the condition of anonymity, said the measure lacked the 60 votes needed to clear a procedural hurdle in the 100-member Senate.

The indefinite postponement of the bills drew quick praise from the Internet community, and ire from Hollywood.

“We appreciate that lawmakers have listened to our community’s concerns, and we stand ready to work with them on solutions to piracy and copyright infringement that will not chill free expression or threaten the economic growth and innovation the Internet provides,” a Facebook spokesman said.

Chris Dodd, chief executive of the Motion Picture Association of America and a former Democratic senator, said the stalling of legislation is a boost for criminals.

“As a consequence of failing to act, there will continue to be a safe haven for foreign thieves,” Dodd said.

Lawmakers, technology companies and the entertainment industry pledged to find a way to combat online piracy and copyright infringement.

Reddit.com, a vocal leader in the protests and among the sites to go dark on Wednesday, said it was pleased the protests were able to slow things down, but said piracy needs to be addressed.

“We really need people at the table who have the technical expertise about these issues who can ensure that whatever bills are drafted have airtight, technically sound language, definitions and frameworks,” the company’s general manager Erik Martin told Reuters.

Reid expressed hope on Friday that Senate Judiciary Committee Chairman Patrick Leahy, who has been shepherding the bill through Congress, could help resolve differences in the legislation.

“I am optimistic that we can reach a compromise in the coming weeks,” Reid said.