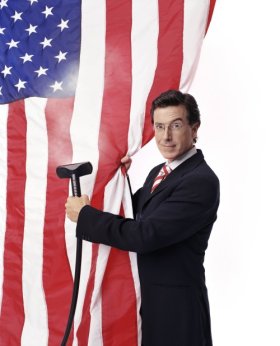 Stephen Colbert is laughing at the U.S. Supreme Court. He started Thursday night, on his show, when Colbert transferred control of his super PAC to his mentor, business partner and friend, Jon Stewart. Here is the clip:

It’s a great set piece of comedic theater underscored by a serious argument: Justice Anthony Kennedy, joined by a majority on the Supreme Court, issued a ruling in 2010 rewriting the nation’s campaign finance rules that is, on its face, pretty absurd.

The argument is actually worth exploring in some detail. Since the 1970s, many lawyers and judges have argued quite reasonably that the the First Amendment’s right to free speech should permit anyone–an individual, a corporation or a union–to spend as much money as they want to influence elections. This argument posits that this sacred right to self-expression around elections simply trumps the danger that the large sums of money could corrupt the political process. It is a balancing test–the First Amendment on one side, the public interest in avoiding corruption on the other side–and reasonable people can reach different conclusions about where the fulcrum should be placed.

But that is not what Kennedy and the Supreme Court did in the Citizens United case. In the majority opinion, the court agreed with past court rulings that the threat of corruption trumps the First Amendment rights of a person, corporation or union to give unlimited amounts of money to politicians for use in campaigns. But then Kennedy and the High Court created a huge carve-out based on a factual statement: “We now conclude that independent expenditures, including those made by corporations, do not give rise to corruption or the appearance of corruption.”

In other words, Kennedy stated that if a wealthy individual, corporation or union spends its money to support its candidate independently, the First Amendment does not have to be more important than the threat of corruption. Rather, “corruption or the appearance of corruption” is simply no longer a threat. Candidates would no longer feel the need to repay their contributors with favors, and contributors would no longer feel they can influence the candidates with the money. The key word here is “independent.” And as I write in this week’s issue of TIME, available online to subscribers, this word, in the 2012 presidential campaign, does not really mean in practice what it seems to mean on paper.

And so we get the case of Jon Stewart and Stephen Colbert, and the Definitely Not Coordinating With Stephen Colbert Super PAC, which has been established with the clear intent of showing how much coordination is still allowed with out triggering the legal definition of coordination. It is a grand experiment. And it clearly mocks the logic that the Supreme Court and the Federal Elections Commission have constructed. If anyone thinks that Stephen Colbert will not take note of, or be grateful for, contributions to the Definitely Not Coordinating With Stephen Colbert Super PAC, they can step forward now. As Rick Tyler, who is running the Newt Gingrich Super PAC told me for my TIME article on the topic, “It’s a big shell game.”

« America Isn’t A Corporation
10 Reasons The U.S. Is No Longer The Land Of The Free »