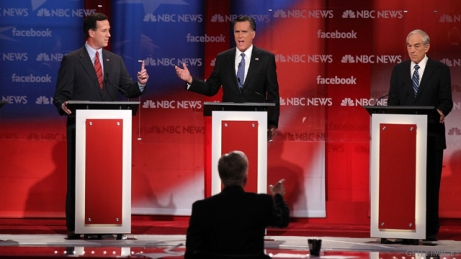 In a debate moderated by “Meet the Press” host David Gregory, the six remaining major GOP presidential hopefuls took the stage for the second time in 12 hours — and this one was a far livelier and entertaining debate than the forum the night before.

Below are POLITICO’s six takeaways from the NBC News/Facebook event in Concord, N.H.:

1) For the most part, the attacks on Mitt Romney didn’t stick

Romney was under much more forceful attack in Sunday morning’s debate than he was in the Saturday night faceoff. He handled it with mixed levels of success.

For the first half of the debate, Romney was under sustained assault from Newt Gingrich and Rick Santorum — the ghosts of his 1994 race against Ted Kennedy were summoned again — and the former Massachusetts governor generally handled it smoothly.

Romney didn’t get rattled and lose his cool, as he did in the Las Vegas debate when Rick Perry went at him. And he pushed back hard against the aggressors.

He also managed to respond to a question about comments he made in 1994 about supporting gay rights, well, without sounding like he was distancing himself from them.

However, he had some faulty moments, including his boast that he’d forced Kennedy to take out a mortgage on his home to keep fighting for his seat — a line that Democrats are sure to use against the multimillionaire in an economic climate with a high rate of foreclosures. Romney also gave an eyebrow-raiser about why he decided not to run for Massachusetts governor again, after Santorum noted he was seen as trailing in the polls.

His exchange with Gingrich about super PACs — in which he said he hadn’t seen ads by a group supporting him and then listed specifically every attack in them — may live on. His opponents have, if not explicitly, then tacitly, decided to make an issue of character instead of Romney’s specific record, most notably “Romneycare.”

However, Romney is still a superior debater compared to the field, most of whom seemed either unable or unwilling to maintain attacks against him. Once again, Ron Paul came to Romney’s rescue by changing the subject instead of answering a question about whether his rival is electable.

At this point, Romney’s so far ahead of the pack — particularly in New Hampshire — that it’s not clear how much a Sunday morning debate will resonate going forward.

It was the moment when Gingrich made clear that he was going to come out swinging this time, after largely taking a pass on Saturday night.

And he did it with a clever phrase — telling Romney to cut the “pious baloney” — that will almost certainly find its way into Democratic ads if the former Massachusetts governor is the nominee.

There were instant jokes about the phrase — “What does that taste like?” — but for Gingrich, it was a significant moment after telegraphing different messages about how he plans to handle the campaign heading into South Carolina. And it will be one of the lines from the debate that people will remember.

Given how aggressively the super PAC supporting him is going at Romney — and his own disdain for the “pious baloney” he says Romney is espousing — it will be hard for Gingrich to do anything less than own the negative message.

How it all plays with voters remains to be seen. For one thing, Gingrich on attack doesn’t always translate well. That said, his poll numbers are low now, and his options for climbing back are limited.

3) Romney will need more practice for the general election debates

All of the debates so far have been multicandidate affairs featuring undercard hopefuls attacking each other. If Romney is the nominee, he won’t have the luxury of letting others slug it out. His exchange with Gingrich over super PAC ads was a reminder of that.

Neither Romney nor Gingrich came off particularly well in that moment, in part, because both claimed they didn’t see ads that they then described in detail. And Romney benefited by the fact that Gingrich is something of a flawed messenger in this type of fight.

But President Barack Obama, regardless of opinion about his governance abilities, is a good debater — and one whose likeability numbers remain high in public polls. Romney still gets a bit shaken in the heat of battle, so he’ll need to work on one-on-one debate skills before the fall.

It may be too late to matter — or maybe not, if tracking polls showing Huntsman on the rise are to be believed.

The former Utah governor got the most air time he’s had in any of the debates so far. That is partly a product, it seemed, of the fact that the debate was in New Hampshire, where he has anchored his campaign.

Huntsman has staked the fate of his bid on doing well in this state — how well is something of a fluid measure, according to his advisers — and it paid off for him.