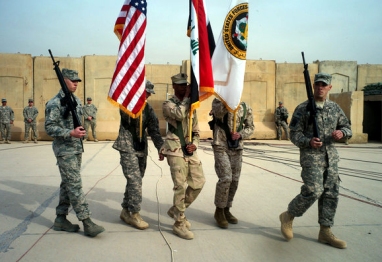 The war in Iraq ended officially Thursday with a flag-lowering ceremony in which Defense Secretary Leon Panetta said a free, democratic Iraq was worth the sacrifice in American lives.

“The cost was high — in blood and treasure for the United States and also for the Iraqi people,” Panetta said. “But those lives have not been lost in vain.”

Panetta joined diplomatic and military leaders at Baghdad International Airport to lower for the last time the white flag of United States Forces-Iraq that had flown over the headquarters of the U.S. mission here.

Panetta declared the war over, and looked ahead to an “independent, free and sovereign Iraq.” He thanked the more than 1 million troops who served there since a U.S.-led force entered Iraq on March 20, 2003. The invasion was aimed at removing Saddam Hussein’s weapons of mass destruction, which were not found.

Nearly 4,500 U.S. servicemembers were killed in more than eight years of war and about 30,000 wounded. Tens of thousands of Iraqis died, troops and civilians, as the U.S. deposed Saddam’s regime and beat down an insurgency backed by al-Qaeda terrorists and sectarian revenge killings that threatened to destroy the country.

Iraq has seen several free elections, and its government, while fractious, is a democratic coalition of Sunnis, Shiites and Kurds who lived under a brutal dictatorship for decades.

“You will leave with great pride — lasting pride,” Panetta told the troops. “Secure in knowing that your sacrifice has helped the Iraqi people to begin a new chapter in history.”

As helicopters clattered overhead, Panetta warned that Iraq will be tested by threats but that the U.S. was committed to the country’s success.

“We are out looking for guys who could pose a threat,” said Army Maj. Gen. Jeffrey Buchanan, the U.S. military’s top spokesman in Iraq.