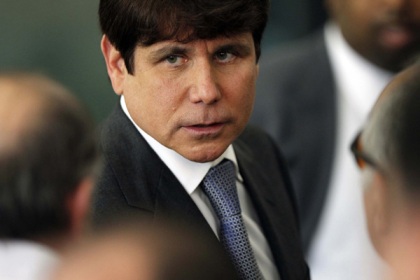 After asking the judge for mercy, former governor Rod Blagojevich was sentenced to 168 months in prison on Wednesday.

Judge James Zagel handed down the sentence after hearing from Blagojevich, himself, during the second day of hearings. He will surrender to officials on February 16.

Blagojevich was also fined $20,000, a fine his financially-strapped family may have trouble paying.

“The vast majority of the facts are not disputed. It is difficult to dispute what is on the recordings,” Judge Zagel said of the FBI-tape recorded conversations of Blagojevich, which were played during the trials. “The governor’s good works don’t off set the governor’s conduct.”

Prosecutors had asked for 15 to 20 years in prison while the defense had asked for a more lenient sentence. Judge Zagel had federal guidelines to follow, but the exact length of the sentence was up to his discretion. Before handing down the actual sentence, Judge Zagel gave his interpretation of those guidelines, saying he was looking into the 12 1/2 to 15 1/2 years sentence range.

Prisoners sentenced to more than 10 years are often sent to a minimum or medium security prison within 500 miles of the inmate’s home.

Blagojevich was convicted on 18 charges of corruption, including trying to sell an appointment to the U.S. Senate seat left vacant by U.S. President Barack Obama, in two separate trials. At his first trial, he was found guilty on one count — providing false statements. Jurors were unable to agree on the 23 other counts. In his second corruption trial, he was found guilty on 17 of 20 counts . The jury found him not guilty on one count and was hung on two others.