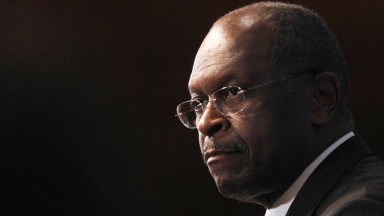 An unapologetic and defiant Herman Cain suspended his presidential campaign on Saturday, pledging that he “would not go away” even as he abandoned hope of winning the Republican nomination in the face of escalating accusations of sexual misconduct.

Mr. Cain announced the suspension of his campaign in Atlanta on Saturday, citing “the continued distractions, the continued hurt.”

“As of today, with a lot of prayer and soul searching, I am suspending my presidential campaign,” Mr. Cain said at a rally here, surrounded by supporters chanting his name. “Because of the continued distractions, the continued hurt caused on me and my family, not because we are not fighters. Not because I’m not a fighter.”

In suspending his candidacy, as opposed to saying that he was quitting the race or ending his bid, Mr. Cain maintained his ability to accept money to pay for his campaign so far and to finance the new venture that he called his Plan B: to travel the country promoting his tax and foreign policy plans. If Mr. Cain had decided to formally close his campaign organization, he would not be able to use donations that may come in.

The collapse of Mr. Cain’s candidacy, which took off despite his eclectic background as a former pizza executive with virtually no political experience, eliminated another Republican candidate who had briefly led in the polls and drew voters who were unhappy with the assumed frontrunner, Mitt Romney. Newt Gingrich, who is now rising in the polls, could well benefit from Mr. Cain’s exit.

Mr. Cain said he would issue an endorsement soon, without indicating whom he would back.

He went out much the way he came in. The circuslike atmosphere — complete with numerous delays, barbecue, a blues band and supporters in colonial-era dress — was in keeping with the campaign’s irreverence and disarray since its inception.

For days now, the campaign had fueled a “will he or won’t he?” storm of speculation, at once thriving on the news media’s attention while denouncing it as the cause of Mr. Cain’s plummeting popularity. Mr. Cain’s critics have long posited that he has been more interested in creating celebrity for himself — as a means to sell books and increase speaking fees — than in making a serious bid for the presidency.

Indeed, in his remarks, Mr. Cain boasted about rising from near obscurity, saying, “Right now, my name I.D. is probably 99.9.”

Still, Mr. Cain, whose standing among likely Republican caucusgoers in Iowa in the latest poll by The Des Moines Register stood at 8 percent, took what may be his last moment in such a large spotlight to denounce the political culture in Washington.

Mr. Cain’s admirers in Atlanta were surprised and disappointed. They blamed the news media, with one of them screaming into the press area after Mr. Cain’s speech.

Lisa Chambers, 48, an unpaid volunteer with the campaign from Snellville, Ga., said: “This is not what I wanted. Not at all. I’m not sure what to do now. I’m so disappointed.”

But other supporters were more pragmatic. Dean Kleckner, a former president of the Iowa Farm Bureau, who gave Mr. Cain an early endorsement, said: “I hate to say this, because he was a remarkable man in many ways, but I honestly think he did the right thing. I’m disappointed in a way, relieved in a way. The polls were just killing him lately.”

Mr. Cain’s political unraveling was as swift and sudden as his ascent. It began just one month after an unlikely surge in the polls, from the bottom ranks to the top tier of Republican candidates, fueled by the strength of his performance in debates, the novelty of his 9-9-9 tax plan, and his Sept. 24 surprise victory in the Florida straw poll.

With his golden voice and folksy manner, Mr. Cain appealed to voters who sought an anti-establishment candidate. Mr. Cain, 65, grew up in poverty in the segregated South, the son of a janitor and a maid. But beyond his personal charm and rags-to-riches biography, he had an eclectic, intriguing résumé: chief executive of Godfather’s Pizza, conservative radio host and chairman of the Federal Reserve Bank of Kansas City, Mo.

Toward the end of October, more than one survey found that Mr. Cain, who has never held public office, essentially tied with Mr. Romney, the former Massachusetts governor who has had a consistent lead in most polls.

The accusations of sexual misconduct rocked the campaign of a candidate who professed to be a devout Christian and family man, pitching himself to the conservative core of the Republican Party, stood accused of a pattern of lewd sexual behavior by several women. And some of the details were graphic.

« Indefinite Military Detention of U.S. Citizens Not Blocked By The Senate For The Second Time
WikiLeaks Unveils The Selling Of Surveillance, Sort Of »