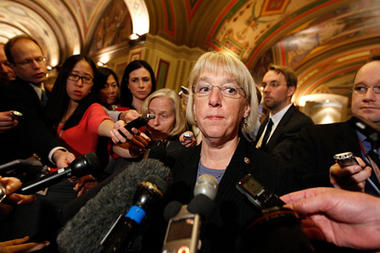 The super committee has officially failed.

In a joint news release, Joint Committee on Deficit Reduction Co-Chairmen Sen. Patty Murray (D-Wash.) and Jeb Hensarling (R-Texas) said they concluded today that they will not be able to make “any bipartisan agreement” public before the deadline.

The brief statement was mostly positive and forward-looking, saying the co-chairmen were “disappointed” at the failure but “hopeful” that Congress would act in its place.

“Despite our inability to bridge the committee’s significant differences, we end this process united in our belief that the nation’s fiscal crisis must be addressed and that we cannot leave it for the next generation to solve,” the statement said.

The two also said they hoped Congress could “build on this committee’s work.”

« Battle Looms Over What ‘Defense’ Means For Automatic Cuts If Supercommittee Fails
Image As Interest: How The Pepper Spray Cop Could Change The Trajectory Of Occupy Wall Street »