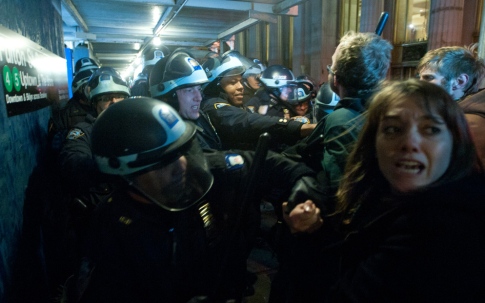 About 70 people were arrested, including some who chained themselves together, while officers cleared the park so that sanitation crews could clean it.

Protesters at the two-month-old encampment were told they come back after the cleaning, but under new tougher rules, including no tents, sleeping bags or tarps, which would effectively put an end to the encampment if enforced.

Mayor Michael Bloomberg said in a statement Tuesday that the evacuation was conducted in the middle of the night “to reduce the risk of confrontation in the park, and to minimize disruption to the surrounding neighborhood.”

He said after the cleaning, protesters would be allowed to return but “must follow all park rules.”

“The law that created Zuccotti Park required that it be open for the public to enjoy for passive recreation 24 hours a day,” Bloomberg said. “Ever since the occupation began, that law has not been complied with, as the park has been taken over by protesters, making it unavailable to anyone else.”

Concerns about health and safety issues at Occupy Wall Street camps around the country have intensified, and protesters have been ordered to take down their shelters, adhere to curfews and relocate so that parks can be cleaned.

At about 1 a.m. Tuesday, New York City police handed out notices from Brookfield Office Properties, owner of Zuccotti Park, and the city saying that the park had to be cleared because it had become unsanitary and hazardous. Protesters were told they could return in several hours, but without sleeping bags, tarps or tents.

Hundreds of former Zuccotti Park residents and their supporters were marching along Lower Manhattan before dawn Tuesday and threatened to block Broadway during the morning rush hour.

Others gathered near Foley Square, just blocks from Zuccotti Park, where they can’t get arrested.

Paul Browne, a spokesman for the New York Police Department, said the park had been cleared by 4:30 a.m. and that about 70 people who’d been inside it had been arrested, including a group who chained themselves together. One person was taken to a local hospital for evaluation because of breathing problems.

Police in riot gear filled the streets, car lights flashing and sirens blaring. Protesters, some of whom shouted angrily at police, began marching to two locations in Lower Manhattan where they planned to hold rallies.

Some protesters refused to leave the park, but many left peacefully.