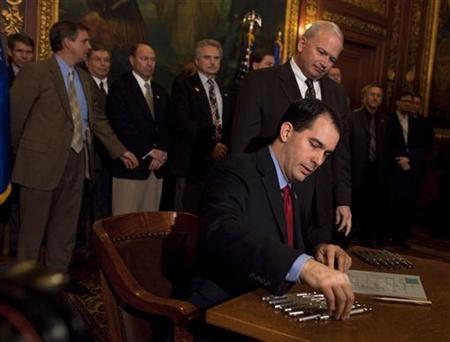 Wisconsin Democrats will launch a drive November 15 to force Republican Governor Scott Walker into a recall election and are confident of getting the more than 540,000 signatures needed, a party spokesman said on Tuesday.

The effort to recall Walker follows an unsuccessful bid by state Democrats to take control of the Wisconsin Senate through an unprecedented array of six recall elections over the summer. Democrats picked up two seats, but remained in the minority.

Walker’s proposals to curb the powers of public sector unions in the state as part of the budget process, ultimately approved by Wisconsin’s Republican-controlled legislature, sparked massive protests earlier this year.

“We had the warm up in the summer and now we have the main event,” Zielinski said.

Walker was elected in November 2010 and under Wisconsin law, he must have been in office at least one year before a recall bid. Once the bid is launched, the recall proponents have 60 days to collect and file the signatures with the Wisconsin Government Accountability Board.

« What Eats Up 53 Cents Of Every Tax Dollar?
Fresh Allegations Are ‘Tipping Point’ For Herman Cain, Iowa Conservatives Say »