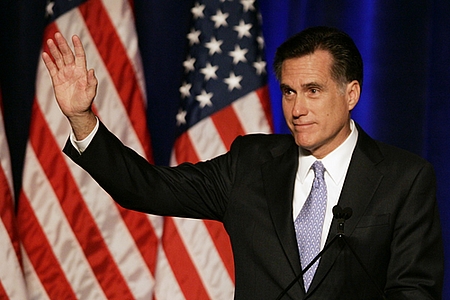 “Our values are noble as citizens and they strengthen the nation. We should remember that decency and civility are values too. One of the speakers who will follow me today has crossed that line I think. Poisonous language doesn’t advance our cause,” Romney said.

Most believe Romney was referring to Bryan Fischer.

“Romney did in fact use the opportunity to put at least a little distance between himself and Fischer,” Right Wing Watch, a watchdog group run by People For the American Way, offered. “People For the American Way repeatedly called on Mitt Romney this week to denounce Bryan Fischer, the radical American Family Association spokesman who immediately followed Romney at the Values Voter Summit and whose relentless bigotry has been thoroughly chronicled here at PFAW’s Right Wing Watch.”

“Mitt Romney clearly realized that his presidential campaign couldn’t ignore the bigotry of Bryan Fischer and the American Family Association,” said Michael Keegan, President of People For the American Way. “I’m glad that he saw fit to put at least a small distance between himself and the hate speech regularly pushed by Fischer, even if he couldn’t bring himself to call Fischer out by name. Since he began running for President, Mitt Romney has bent over backwards in a desperate attempt to make himself palatable to the extreme right. At least we’ve seen that there are some things he’s willing to speak out against, no matter how tepid his condemnation may be. It’s disappointing that none of the other candidates have been willing to go even that far.”