Gay Weddings Can Be Performed By Military Chaplains, Pentagon Says 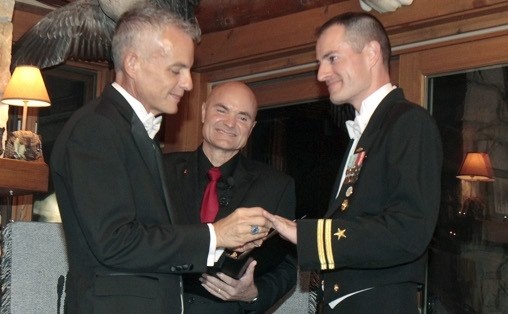 The Pentagon will permit military chaplains to perform same-sex marriage as long as such ceremonies are not prohibited in the states where they reside, it said Friday.

Defense Department guidance issued to military chaplains said they may participate in ceremonies on or off military bases in states that recognize gay unions. Chaplains are not required to officiate at same-sex weddings if doing so is counter to their religious or personal beliefs, the guidance said.

And regardless of the Pentagon guidance, military chaplains will still need to take cues from their religious order, said Gary Pollitt, spokesman for the Military Chaplains Association.

“Just because the Department of Defense says this can happen, the chaplains perform such rites in keeping with their ecclesiastical authorization. Period,” Pollitt said.

The decision validates a move made by the Navy in May that earned the ire of conservative critics and Pentagon observers, because Navy officials acted on their own instead of in tandem with other military services. The guidance also irked Republican lawmakers who were still attempting to block plans to end the ban on gays serving openly in the military, known as “don’t ask, don’t tell.”

But the Pentagon officially ended the ban 10 days ago. Friday’s guidance is seen as additional, detailed instructions for military chaplains. Similar guidance on how lifting the ban affects other aspects of military life is expected in the coming months.

Friday’s announcement coincides with the departure of Joint Chiefs of Staff Chairman Adm. Mike Mullen, who advocated for ending the ban on gays serving openly in the military.