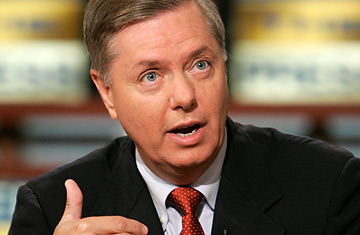 If Congress can’t come up with a deficit reduction deal this year, Republican Sen. Lindsey Graham said Sunday that he’ll try to prevent further required cuts in the military budget.

The comment showed that contingency plans already are in place to avoid some of the more than $1 trillion in mandated spending cuts under a “trigger” mechanism intended to motivate Congress to reach a deficit deal.

A special joint committee set up under last months debt ceiling agreement has until November 23 to work out such an agreement, which must then pass Congress by December 23. Otherwise, the required cuts of the trigger mechanism kick in.

The debt ceiling deal included $900 billion in spending cuts, including $400 billion from the military. Defense Secretary Leon Panetta has said any further cuts under a trigger mechanism would harm military capabilities.

However, a new budget showdown in Congress that threatens to partially shut down the government as soon as Saturday has raised concern that bipartisan agreement on a much larger deficit reduction plan won’t happen in the current political climate.

The latest budget impasse involves a short-term measure to fund the government for seven weeks after the current fiscal year ends on September 30. It includes increased emergency disaster funding after Hurricane Irene, Tropical Storm Lee, wildfires and tornadoes so far this year.

House Republicans have passed a bill that cuts spending elsewhere to offset some of the increased disaster relief aid.

Democrats oppose offsets for emergency aid, saying disaster relief for Americans in need should be unencumbered. The Democratic-led Senate rejected the House measure on Friday.

Graham, whose home state of South Carolina absorbed some of the brunt of Hurricane Irene, called the House bill “reasonable.”

“We can’t borrow money every time something goes wrong in America,” he said.