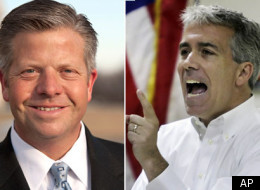 Voters in at least one Illinois congressional district will have to choose between two Republican incumbents next year after Representative Joe Walsh announced Wednesday that he will seek re-election in a new district, pitting him against a fellow Republican, Representative Randy Hultgren, in a primary.

Mr. Walsh, a darling of the Tea Party and a vocal critic of President Obama, won his current suburban district, the 8th, in 2010 by fewer than 300 votes. That district’s borders were changed this year by a Democrat-dominated state legislature as part of the once a decade remaking of political districts following the new U.S. Census Bureau counts. Among other changes, the redrawing put Mr. Walsh’s home into Mr. Hultgren’s district.

“This area is home,” Mr. Walsh wrote in an e-mail to his supporters referring to the new district where he now intends to run.

Republicans have complained bitterly about the new congressional map approved by state lawmakers in Springfield, arguing that it threatens six of the state’s 11 current Republican congressman.

Mr. Walsh and Mr. Hultgren, who is also a freshman, are part of a group of Republicans seeking to overturn the map in a federal court.

Still, in a release from Mr. Hultgren’s campaign office, Mr. Hultgren expressed disappointment with Mr. Walsh’s decision “to abandon his own district to run against me in a primary.”

“By doing so, he’s playing into the hands of the Springfield Democrats and Nancy Pelosi, who have drawn the congressional map for Illinois specifically to encourage just such a contest,” said Mr. Hultgren, a conservative, who won the 14th congressional district in 2010 by more than 6 percentage points.

In response, Justin Roth, the chief of staff for Mr. Walsh, said that Democrats had controlled “the entire process, they drew the maps.” He added, “Unfortunately that means two Republicans are going to go against each other.”

Mr. Walsh raised his national profile during the debt ceiling debate this summer, touring the media circuit after he put out a video vehemently accusing President Obama of bankrupting the nation and lying to the American public. The exposure brought an added level of scrutiny to the congressman, as well, stirring up reports of an ongoing child support battle in which his ex-wife accuses him of owing her more than $117,000. (Mr. Walsh has denied that.)

« House GOP Leaders Are Dealt A Surprise Rebuke In Spending Bill’s Defeat
American Hikers, Free On ‘Bail,’ Are On Their Way Home (But Who Paid?) »