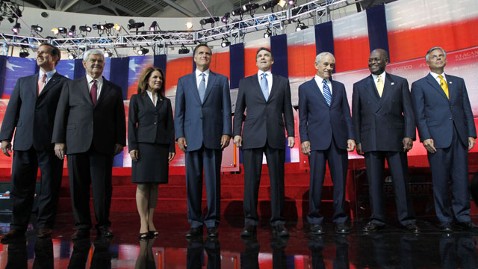 The organizers of Wednesday night’s debate did their best to turn the eight person debate into one that was really about two people: Perry and Romney.

And, in that match-up, Romney came out the winner.  He was confident and solid throughout the entirety of the debate, a benefit of being a two-time presidential candidate. He stuck to his strong points – economy and jobs – deftly sidestepped his weakness – healthcare – and took advantage of stumbles made by his main opponent Rick Perry.

Perry’s first outing on the GOP debate stage was decent, but inconsistent. He was like a boxer who comes out strong for the first two rounds, but then runs out of stamina by the later rounds.His attacks on Romney’s record of job creation in Massachusetts during the first few minutes of the debate were sharp and crisp.But, when it came to defending his own statements on Social Security and climate change later in the debate he floundered.

Two candidates who struggled in last month’s debate in Iowa – Jon Huntsman and Herman Cain – were more polished and poised in this one. Still, Huntsman’s message of moderation and his emphasis on electability is going to do little to improve his standing among the GOP base.

Michele Bachmann, the surprise “winner” of the first GOP debate in South Carolina earlier this year, was solid but lacked the sizzle of previous debates. Instead of attacking Perry – the guy who is the biggest threat to her candidacy – she stuck to her well-worn talking points.

This debate is the first of three over the next two weeks which means these eight candidates will have plenty of opportunities to improve – or falter.

One thought on “Analysis: Who Won the Republican Presidential Debate?”