Experimental Therapy May Be Beginning Of The End For AIDS 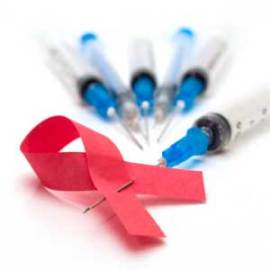 One step closer to a cure for AIDS – that is the implication of results out Wednesday from from several leading research centers.

It should be noted that many people involved in AIDS research, including several who carried out the latest research, avoid the “c” word. Their goal is to allow people infected with HIV to live without daily doses of the medications that usually keep the virus under control– at a large financial cost –and a risk of side effects.

The latest work, published in Science Translational Medicine, details 43 HIV-infected volunteers who had experimental genes inserted into their disease-fighting white blood cells 11 years ago. All patients are doing fine. After more than a decade with this gene therapy, there are no side effects. In almost every one the inserted genes are still working properly.

While these experiments were never intended to treat or cure anything, they lay the groundwork for gene therapy that could have a substantial impact on HIV disease.

A cure for AIDS became an obvious goal as soon as the disease was discovered 30 years ago. But it became “the dirty four letter word,” as Jon Cohen of Science magazine put it, after some spectacular failures. Soon after the powerful cocktail of anti-AIDS drugs came on the market in 1996, some scientists speculated they could use the drugs to knock out all the infection in the body. But that idea crashed as repeated experiments showed that pockets of infected cells hid in various parts of the body, emerging quickly as soon as the drugs were withdrawn.

HIV has infected some 50 million people in the world and none has been cured — except perhaps Timothy Ray Brown.

It was the case of Brown, also known as “the Berlin patient,” that energized the new search for a cure. Infected with HIV, Brown was dying not of that disease, but of leukemia. His only hope was a bone marrow transplant – first killing, then replacing all the cells in his body that make blood cells with those from a donor. Brown’s doctor Gero Hütter was not an AIDS specialist, but he knew that about 1 percent of people of European decent have a mutation in a receptor called CCR5 on certain white blood cells that make HIV infection very difficult. So the doctor sought a donor with that mutation.

The transplant took place in 2007. In 2010 Hütter published his results. Not only had the transplant eliminated Brown’s leukemia, he no longer needed to take his HIV medications and the most sophisticated tests find no trace of HIV in his body.