Will Tammy Baldwin Be The First Openly Gay Senator? 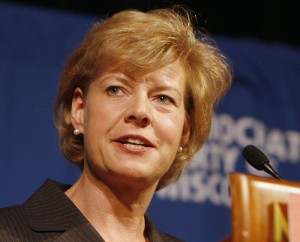 Wisconsin Rep. Tammy Baldwin (D) has made it official — she’s running for the Senate seat being vacated by retiring Sen. Herb Kohl (D) next year.

If she wins, Baldwin will make history as the the first openly gay member of the Senate. But how much will her sexuality factor into the race (if at all)?

Baldwin was first elected to represent Wisconsin’s 2nd district in 1998, becoming the first female House member from the Badger State. She was also the first openly gay person to be elected to Congress as a non-incumbent.

Rep. Barney Frank (D-Mass.) was the first congressman to voluntarily come out as gay — he did so in 1987, during his fourth term, in the Boston Globe. There are currently four gay members of Congress, all in the House.

“When I first ran for Congress in 1998, people counted me out,” she says in her Senate announcement video released this morning “But we worked hard, campaigned across south-central Wisconsin, and we won.”

In that announcement — via video and an e-mail to supporters — Baldwin made no mention of being gay. And, when asked about the impact on her campaign during a conference call with reporters, Baldwin said: “From day one, I have always been open about my sexual orientation. I think that that integrity is something that is important to voters. But frankly, this campaign isn’t going to be about me.”

Of course, that depends on who ultimately decides to run — and who Republicans decide to nominate.

If former Rep. Mark Neumann wins the Republican primary, there could be some sparks over gay rights.

“If somebody walks in to me and says, ‘I’m a gay person, I want a job in your office,’ I would say that’s inappropriate, and they wouldn’t be hired because that would mean they are promoting their agenda,” Neumann said in 1997. “The gay and lesbian lifestyle [is] unacceptable, lest there be any question about that.”

Neumann has avoided recent questions about those comments. He is likely to face former governor Tommy Thompson in next year’s Republican primary.

“Of course it will come up — but if Republicans overplay their hand, it could backfire,” said Madison-based Democratic consultant Paul Maslin. “Remember, this very German, Polish and Catholic state elected two Jewish senators from 1988 to 2006.”

Republicans argue that Baldwin can’t win statewide — not because of her sexual orientation but because she’s too liberal.

Baldwin’s current House district was represented by a Republican until 1999, but in recent years it has become a liberal stronghold. President Obama won there with 69 percent in 2008.

“When you stand up to big and powerful interests, sometimes that leads to the type of labels you’re hearing,” Baldwin told reporters, highlighting her votes against deregulation and the Iraq war . “Nothing speaks louder of my capacity to win support and my effect than the fact that [my constituents] have returned me to the House of Representatives six times.”

In her announcement video, Baldwin presents herself repeatedly as a champion of the middle-class in the mold of previous Wisconsin senators.

“Just like Herb Kohl, I’ve made standing up for the middle-class my top priority,” Baldwin says.

She also name-checked former Feingold, who declined to run for Kohl’s seat despite pressure from both liberal activists and the Democratic establishment after losing his seat in 2010 to now-Sen. Ron Johnson(R).

In the conference call, Baldwin told reporters that the government needed to reduce its debt — something Republicans have hammered — but “we have to do so fairly with everybody doing our share.” She also called for stimulus investments in infrastructure “to put people back to work immediately.”

So far, Baldwin is the only candidate in the Democratic Senate primary, but that might not stay true for long. Rep. Ron Kind and former Rep.Steve Kagen are also considering bids.

“At this time, I’m carefully weighing all of my options but my main focus continues to be my work in Congress,” Kind said in a statement today. “I will be giving the race due consideration as I continue to talk with my family, friends and supporters in western Wisconsin and across the state.”

A tough fight is shaping up on the Republican side, where Neumann is hitting Thompson hard as too moderate and Wisconsin Assembly Speaker Jeff Fitzgerald is dismissing both the GOPers as old blood.